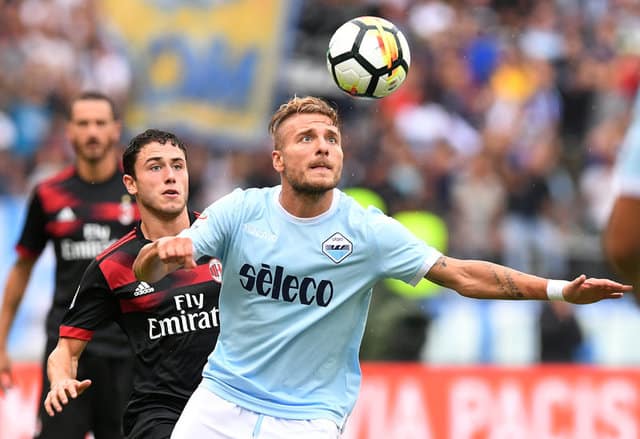 Lazio forward Ciro Immobile scored a 10-minute hat-trick to lead his side to a 4-1 demolition of AC Milan whose perfect start to the season was left in tatters on Sunday.

Milan had won their first six matches of the season — two in Serie A and four in the Europa League — but found themselves four goals behind in less than an hour at a soggy Stadio Olimpico in Rome.

Inter Milan made it nine points from three games with a 2-0 win over promoted SPAL, the first goal scored by Mauro Icardi from a penalty which took the referee five minutes to award after consulting with the video assistant.

Napoli joined Inter and champions Juventus on nine points after Jose Callejon, Dries Mertens and Piotr Zielinski scored in the final half-hour to give them a 3-0 win at Bologna. Juventus beat Chievo by the same score on Saturday.

Fiorentina thumped Verona 5-0 away to claim their first win of the season in style and Cagliari also broke their duck with a 1-0 win over Crotone in the first match at the temporary Sardegna Arena which will host their games for the next four years.

Atalanta, 2-1 winners over Sassuolo, and Udinese, who beat Genoa 1-0, also won for the first time.

Lazio’s match was in danger of being postponed due to torrential rain in Rome before it was decided to delay kickoff for an hour.

The hosts went ahead with an Immobile penalty in the 38th minute after Franck Kessie fouled Luis Alberto.

Immobile struck again four minutes later with a brilliant volley from Senad Lulic’s cross, and completed his hat-trick three minutes into the second half after Marco Parolo’s clever pass sent him clear.

One minute after that, Immobile burst down the left and set up Luis Alberto who tapped in the fourth before Milan finally pulled themselves together and Riccardo Montolivo got a goal back.

“It was a bad defeat with many negative aspects,” said Milan coach Vincenzo Montella. “Lazio’s goal changed the game psychologically and we weren’t capable of reacting well enough.”

Inter handed promoted SPAL their first defeat thanks to Icardi’s third goal in five games and a thumping volley from Ivan Perisic in the 87th minute.

The first goal raised more questions over the time taken to reach decisions using video replays after Joao Mario was fouled on the edge of the area in the 22nd minute and Icardi finally scored in the 27th.

Fiorentina took advantage of a nightmare start by opposing goalkeeper Nicolas as they handed Verona their heaviest-ever Serie A home defeat.

The Brazilian failed to hold Marco Benassi’s shot and Giovanni Simeone tapped in after two minutes, then crashed into Federico Chiesa and gave away a penalty which Cyril Thereau converted on his Fiorentina debut in the 10th.

Davide Astori added the third in the 24th minute after he was left totally unmarked, Jordan Veretout scored the fourth with a spectacular free kick in the 62nd minute and Gil Dias completed the rout.

England’s Anderson back on top of ICC bowling rankings