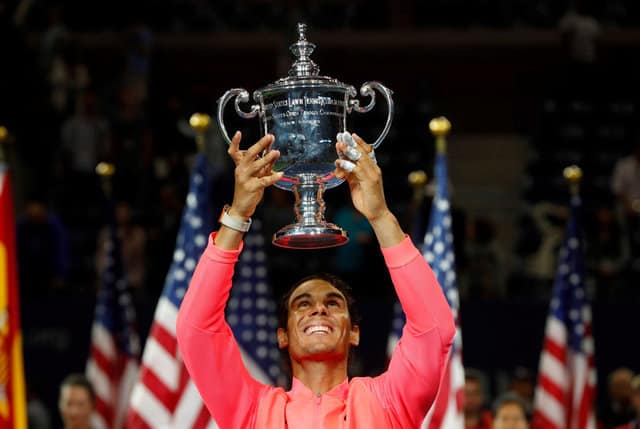 Rafa Nadal has long been king of the Paris clay but he was just as dominant on New York hardcourt on Sunday as he collected grand slam title number 16 with a clinical demolition of Kevin Anderson in the U.S. Open final.

The Spaniard insists nothing comes easy to him on any court but scanning his list of grand slam final triumphs one would be hard-pressed to find anything more comprehensive than this 6-3 6-3 6-4 victory on the Arthur Ashe Stadium.

While his battling South African opponent kept the contest from being a complete blowout, there was never a single moment when Nadal was under threat.

Despite being one of biggest servers on the ATP Tour, Anderson was unable make a dent in Nadal’s defence and he managed not a single break point in his maiden grand slam final.

“It was more the conundrum of playing Rafa as opposed to being in my first final,” said Anderson.

“His competitiveness, consistency at that level. He never goes away.”

Having captured his third U.S. Open title, Nadal made it very clear to his rivals that he would indeed not be going away any time soon.

And although he did not count it as one of his primary objectives, the 31-year-old did not dismiss the possibility of one day surpassing Federer’s grand slam haul of 19 titles.

“I really don’t think much about these kind of things. I do my way, he does his way,” said Nadal.

“I’m very happy with all the things that are happening to me, win this title again.

“I still have the passion and the love for the game. I still want to compete and still feel the nerves every time that I go on court. While these things keep happening, I will be here.

While women’s tennis produced two first-time grand slam winners this season, the old guard continued to rule supreme in the men’s game with Nadal and Federer sweeping the majors with two apiece.

It marks the fourth time Nadal has won at least two major titles in a year and just the seventh time since tennis went professional in 1968 that a men’s grand slam final was contested by two players 30 and over.

With Federer and Nadal fit again after battling last year’s injury woes and Andy Murray and Novak Djokovic fighting their way back to fitness, the Big Four might well be back in business next season.

“After them taking off most of last year to come back, winning all four grand slams was quite an achievement, regardless of how good they are,” said Anderson, who is also 31.

“Looking at Rafa, just such a great competitor. He really makes you earn every single point. Roger, also.

Eight killed, including gunman, in shooting at Texas home