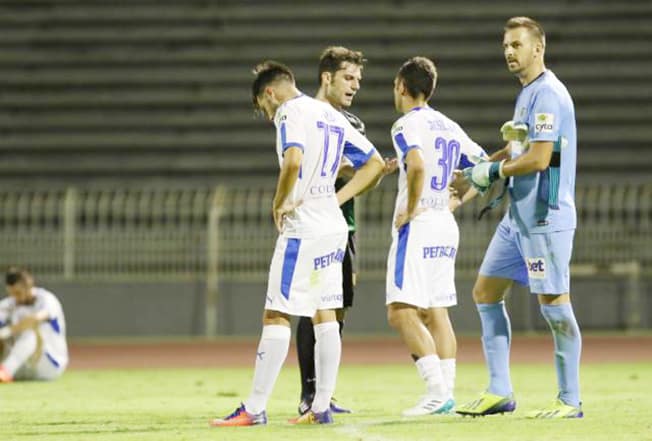 Olympiakos produced the biggest upset of the season so far when they held championship hopefuls Apollon to a 1-1 draw in Nicosia.

Anorthosis defeated Aris 1-0 and moved to the top of the table with AEL a point behind, following their win over Doxa Katokopias by the same score.

Nicosia giants Apoel and Omonia got their seasons off to a winning start with wins over Nea Salamina and Ethnikos Achnas respectively.

Everybody was expecting a goal feast for Apollon against Olympiakos but the home side, after surviving some relentless pressure early on in the game, more than matched their more celebrated opponents and began to exposed Apollon’s wobbly defence.

Pachipis gave Olympiacos the lead on the stroke of half-time and could have doubled the score just after the break but youngster Kappartis failed to head the ball past Apollon’s goalkeeper Bruno Vale from close range.

Apollon equalised through Santana midway into the second half but despite piling on the pressure in the final stages of the game Olympiakos held firm for a valuable point.

There were no such worries for Cyprus’ other European representative, Apoel, who despite falling behind to an early Damachou goal ran out comfortable 4-1 winners.

Apoel’s recent Hungarian signing Rolland Salai turned the game around first by blasting the ball past Salamina’s goalkeeper Veselovsy from a difficult angle and then winning the penalty that Igor de Camargo converted to give the defending champions the lead.
De Camargo doubled his tally in the 72nd minute while Mikael Pote grabbed the fourth in the final stages of the game.

Twelve thousand fans turned up to watch Omonia’s championship debut against Ethnikos Achnas and they were not disappointed thanks largely to Matt Derbyshire who got both goals, the second just six minutes from time.

Omonia more than deserved the win and missed a host of chances to seal the three points earlier in the game.
Derbyshire gave Omonia the lead in the 24th minute with Ethnikos’ best player Nikolai Kipiani equalising with a sublime finish midway into the second half.

Anorthosis also toiled for the win against Aris even though they controlled the game from start to finish and their opponents rarely troubled them in defence.

The only goal of the game came on the hour mark by summer signing Cisse after being set up by the impressive Pranic.

Despite failing to impress, AEL defeated Doxa Katokopias thanks to a late goal by Aldair and moved into second place, a point behind Anorthosis, while in the final weekend game Pafos FC and Alki shared the points in a 1-1 draw.

Eric Janza gave Pafos FC an early lead but Dylan Duventru equalised just before the break for the visitors.

The final game of the round on Monday night saw AEK thrash Ermis 4-0, leaving the side from Aradippou still looking for their first point.

Janet Jackson broke down in tears on stage on Saturday