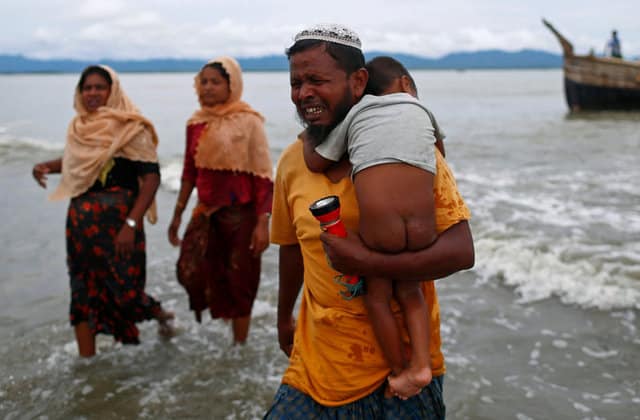 Zeid Ra’ad al-Hussein’s comments to the United Nations Human Rights Council in Geneva came as the official tally of Rohingya who have fled Myanmar and crossed into southern Bangladesh in just over two weeks soared through 300,000.

The surge of refugees – many sick or wounded – has strained the resources of aid agencies already helping hundreds of thousands from previous spasms of bloodletting in Myanmar.

“I call on the government to end its current cruel military operation, with accountability for all violations that have occurred, and to reverse the pattern of severe and widespread discrimination against the Rohingya population,” he added.

“The situation seems a textbook example of ethnic cleansing.”

Attacks by Arakan Rohingya Salvation Army (Arsa) militants on police posts and an army base in the northwestern state of Rakhine on Aug 25 provoked a military counter-offensive.

Myanmar says its security forces are carrying out clearance operations to defend against Arsa, which the government has declared a terrorist organisation.

Myanmar on Sunday rebuffed a ceasefire declared by Arsa to enable the delivery of aid to thousands of displaced and hungry people in the north of Rakhine state, declaring simply that it did not negotiate with terrorists.

Human rights monitors and fleeing Rohingya accuse the army and Rakhine Buddhist vigilantes of mounting a campaign of arson aimed at driving out the Rohingya.

The government of Myanmar, a majority Buddhist country where the roughly one million Muslim Rohingya are marginalised, has repeatedly rejected charges of “ethnic cleansing”.

Officials have blamed insurgents and Rohingya themselves for burning villages to draw global attention to their cause.

Zeid said Myanmar should “stop pretending” that Rohingya were torching their own houses and its “complete denial of reality” was damaging the government’s international standing.

Western critics have accused Myanmar leader Aung San Suu Kyi of failing to speak out for the Rohingya, who are despised by many in the country as illegal migrants from Bangladesh.

Some have called for the Nobel Peace Prize Suu Kyi won in 1991 as a champion of democracy to be revoked.

“Large numbers of people are still arriving every day in densely packed sites, looking for space, and there are clear signs that more will cross before the situation stabilises,” the International Organisation for Migration said in a statement.

“New arrivals in all locations are in urgent need of life-saving assistance, including food, water and sanitation, health and protection.”

Thousands of Rohingya refugees are still stranded on the Myanmar side of the River Naf, which separates the two countries, with the biggest gathering south of the town of Maungdaw, monitors and sources in the area told Reuters.

About 500 houses south of the town were set on fire on Monday, a villager in the Maungdaw region, Aung Lin, told Reuters by telephone.

“We were all running way because the army was firing on our village,” he said. “A lot of people carrying bags are now in the rice fields.”

Reuters journalists in Cox’s Bazar could see huge blazes and plumes of smokes on the other side.

Those still waiting to cross into Bangladesh – many hungry and exhausted after a days-long march through the mountains and bushes in monsoon rain – have been stopped because of a crackdown on Bangladeshi boatmen charging 10,000 taka ($122) or more per person, sources said.

Arshad Zamman, 60, said his family had only 80,000 Burmese kyat ($60) and so he had taken a boat to Cox’s Bazar on his own and would return to pick up his wife and two sons when he had enough for their journey.

“I will try to find money here. I will beg and hopefully some people will help me,” he said.

Elsewhere in Myanmar, communal tension appeared to be rising after more than two weeks of violence in Rakhine state.

A mob of about 70 people armed with sticks and swords threatened to attack a mosque in the central town of Taung Dwin Gyi on Sunday evening, shouting, “This is our country, this is our land”, according to the mosque’s imam, Mufti Sunlaiman.

The government said in a statement the mob dispersed after police with riot shields fired rubber bullets.

Rumours have spread on social media that Muslims, who make up represent about 4.3 per cent of a population of 51.4 million, would stage attacks on Sept. 11 to avenge violence against the Rohingya.

Tensions between Buddhists and Muslims have simmered since scores were killed and tens of thousands displaced in communal clashes accompanying the onset of Myanmar’s democratic transition in 2012 and 2013.

North Korea warns US over sanctions push ahead of UN vote