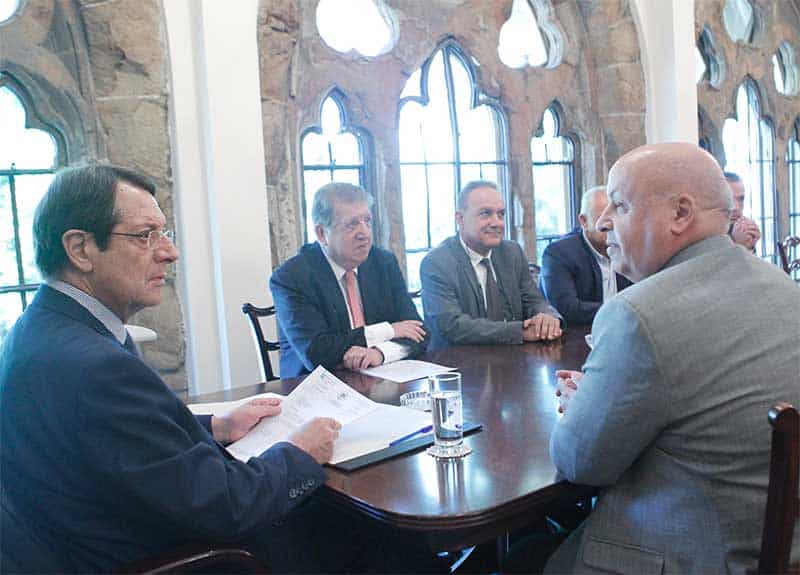 Civil servants have seen their income slashed by 30 per cent on average throughout the economic crisis, union Pasydy boss Glafcos Hadjipetrou said on Tuesday.

Hadjipetrou was speaking after delivering a copy of the union’s decisions taken at its general meeting last May to President Nicos Anastasiades.

“We delivered the decision of the latest meeting, in which the president was present and thus is well aware of the issues concerning the civil service.”

Such issues, he added, include the understaffed civil service and the absence of a pension scheme for newly-hired civil servants.

Asked whether the union was happy with progress on restoring pay increments and unfreezing promotion posts, Hadjipetrou said the original distortion had been the freezing of increments.

“Based on the legislation that introduced the freeze, this year it was supposed to end,” he said.

“The measures taken during the crisis have incurred a loss of income to the public and broader-public sector to the tune of over €2 billion, and this only counting civil servants. The plan had been for more cuts to be imposed in the private sector, which dried up the market.”

Noting that workers in both the public and private sectors should be reimbursed appropriately, Hadjipetrou said that what saved the country in 1974, following the Turkish invasion, was “wise legislation” that secured jobs.

“This didn’t happen this time, as Pasydy suggested, and the end result was that cuts in the public sector touched on 30 per cent, and in the private sector surpass that percentage,” he said.

With regard to Pasydy’s wishes regarding the government’s 2018 budget, Hadjipetrou said the union simply “wants the civil service to function in the best possible way so that it can serve the public, because it is the one responsible for implementing government planning”.

Pasydy’s boss said the union does not plan on meeting with the rest of the candidates for the presidency, because “this is not customary”.

Asked about a remark by Finance Minister Harris Georgiades, who said the minimum wage in Cyprus is considered high, Hadjipetrou said there are more qualified people to comment.

“We are saying that every worker should be paid wages that will allow them to live decently, and should receive what they give,” he said.