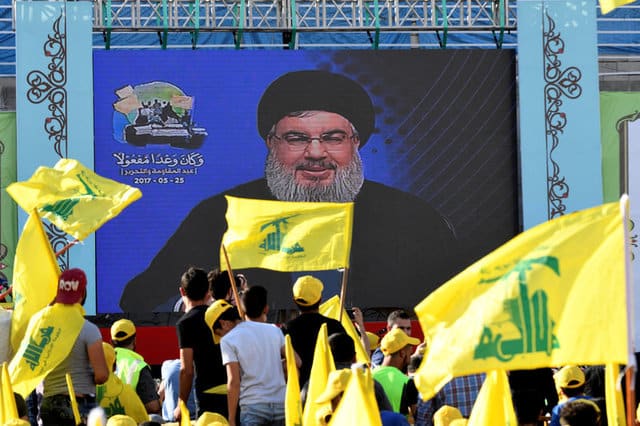 File photo: :People watch Lebanon's Hezbollah leader Sayyed Hassan Nasrallah as he appears on a screen during a live broadcast to speak to his supporters at an event marking Resistance and Liberation Day in Bekaa Valley, Lebanon, May 25, 2017

The Lebanese Shi’ite group Hezbollah has declared victory in the Syrian war while Russia said government forces had driven militants from 85 per cent of the country where President Bashar al-Assad’s rule seemed in danger two years ago.

The comments from two Syrian government allies mark the most confident assessments yet of Assad’s position in the war that spiralled out of 2011 “Arab Spring” protests against him.

The government’s most recent advances have recovered swathes of territory in eastern Syria from Islamic State, which is being targeted in the same region in a campaign waged by US-backed Kurdish and Arab militias.

Hezbollah leader Sayyed Hassan Nasrallah, whose group has sent thousands of fighters toSyria, dismissed the fighting left to be done in Syria as “scattered battles”.

“We have won in the war (in Syria),” he said in comments reported by the Lebanese newspaper al-Akhbar.

Referring to Assad’s opponents, Nasrallah said “the path of the other project has failed and wants to negotiate for some gains”. The comments, made at a religious gathering, were confirmed to Reuters by a source familiar with the speech.

Hundreds of thousands of people have been killed in the conflict, which has fractured Syria into a patchwork of areas and generated a refugee crisis of historic proportions, forcing millions of people into neighbouring states and Europe.

Military backing from Iran and Russia has proven critical to Assad in the war with insurgents including rebels who have been backed by Gulf Arab states, Turkey and the United States, which has decided to end a programme of covert support to rebels.

Rebel groups were making steady advances against Assad as recently as 2015, when the deployment of the Russian air force to Syria turned the tide in his favour.

Over the past year, Assad has crushed numerous pockets of rebel-held territory in the cities of Aleppo, Homs and Damascus, brokering local deals by which thousands of his opponents have been moved to remaining rebel-held enclaves of the country.

Ceasefires brokered by Russia, Turkey, Iran and the United States in remaining rebel-held areas of western Syria have freed up manpower on the government side, helping its advance east into the oil-rich province of Deir al-Zor.

Government forces last week reached Deir al-Zor city, the provincial capital on the Euphrates River, breaking an Islamic State siege of a government-held enclave and a nearby air base.

“To date, 85 percent of Syria‘s territory has been cleared of the militants of illegal armed groups,” the RIA news agency cited Alexander Lapin, chief of staff of the Russian military contingent inSyria, as saying.

Islamic State fighters are still in control of around 27,000 square km of Syria‘s territory, he said.

Lapin made no reference to a swathe of territory held in northern Syria by an alliance of US-backed militias – the Syrian Democratic Forces (SDF) which is led by the Kurdish YPG and is not at war with Assad.

“The liberation of (Deir al-Zor) city is proceeding,” Lapin said. “Syrian troops are finalising the defeat of the ISIL group blocking the northern and southern districts of Deir al-Zor,” he said. He said the assault was being led by General Suheil al-Hassan, a Syrian officer who has risen to prominence in the war.

The SDF, which is battling to defeat Islamic State at Raqqa city, has in recent days launched a separate offensive against Islamic State in Deir al-Zor province.

The Syrian Observatory for Human Rights said air strikes likely to have been carried out by Russian warplanes killed 69 people since Sunday near the Euphrates River in Deir al-Zor.

The Russian Defence Ministry did not immediately respond to a Reuters request for comment on Tuesday’s report by the Britain-based monitoring group.

The Observatory, which identified the victims as civilians, said the air strikes had hit encampments on the western bank of the river and vessels crossing to the eastern side.

Syrian state television separately reported the army was conducting artillery and machine gun attacks on rafts carrying Islamic State militants to the eastern side of the river from their last positions in Deir al-Zor city.

“Their only escape route out of the city is through rafts on the river, and god willing, we will target them in the water before they get away,” a commander said in a televised interview.

Aside from the territory held by the SDF and Islamic State, rebels still control a corner of the northwest, a corner of the southwest, an area near Damascus, and an area north of the city of Homs.

Syrian government attacks in the rebel-held Eastern Ghouta region near Damascus suggest Assad may yet try to recapture the remaining rebel-held areas of the west, including enclaves at the borders with Turkey, Jordan and Israel.

A major general in the Syrian Republican Guard interviewed by a state-run TV station from Deir al-Zor on Monday warned Syrians who had “run away or escaped from Syria to any other country” not to return.

Major General Issam Zahreddine, head of the 104 Brigade which was under IS-siege for three years in Deir al-Zor, later issued a clarification on his Facebook page, saying his warning had been directed only at people who had taken up arms.