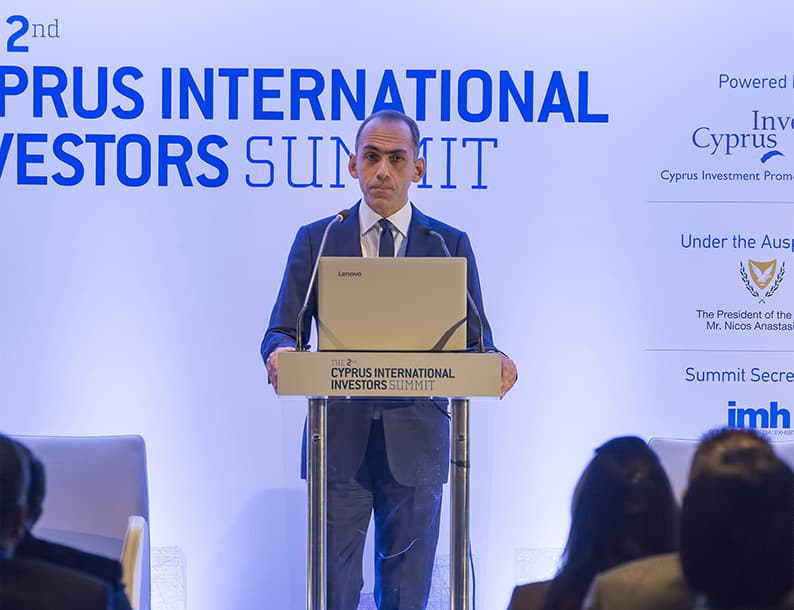 Finance Minister Harris Georgiades told an investors summit on Tuesday that Cyprus had not become complacent about the economy despite strong growth, and that much was still to be done.

The second such summit in Limassol, attracting more than 150 investors from across the globe, was organised by the Cyprus Investment Promotion Agency (CIPA) to present major investment opportunities as economic growth picks up pace four years after the 2013 financial crisis.
Georgiades told participants that Cyprus was a welcoming and safe place to spend a holiday, an excellent place to live, to buy a holiday house, to send the children to school, and to enjoy retirement. “Cyprus is also an excellent place to do business,” he said.

“The Cyprus economy is currently growing at a rate of 3.5 per cent of the GDP per year, much higher than the EU average, and the outlook remains positive,” he added.

“We are not becoming complacent and fully realise that there is more to be done. And likewise, our commitment to continue working for a stable, business friendly economic environment remains equally strong.”

Georgiades reminded participants that the island has a very well developed financial and business services sector and was making strides in the direction of developing into an investment fund management centre. It is also the largest ship management centre in the EU.
He also said there were other significant developing sectors including education, health and energy.

The minister said that even during the crisis years when Cyprus was under an IMF/EU programme, the government did not raise or introduce any new taxes but had maintained the current corporate tax at 12.5 per cent, with new incentives being introduced, such as a notional interest deduction for new equity in any Cypriot company, a tax break for innovative companies, and an attractive non-domicile tax framework.

“Economic policy has been focused on supporting the private sector and in doing so, facilitating the creation of conditions which will result in new opportunities, new business and new jobs,” he said.

Michalis Sofocleous, Director of the Office of the President, said that since 2015 when the summit was first introduced, Cyprus had made remarkable progress, both in terms of modernisation and simplification of administrative procedures, and also in terms of economic performance.
“It is an established and acknowledged fact that our government’s approach is to maintain sound public finances, preserve a stable and competitive tax regime, and provide incentives for new business and investments,” he said.
CIPA Chairman Christodoulos Angastiniotis said that in 2016 the Cyprus economy recorded a notable 9.1 per cent rise in FDI (foreign direct investment) inflow compared with the previous year. This was the second largest increase at an EU level on a backdrop of a 2.8 per cent GDP growth, he said.
He added that in the second quarter of 2017, GDP grew by 3.5 per cent “as a consequence of highly improved economic climate and revived investment interest.”
“You, more than anyone else, know that timing is a determining factor when it comes to investing,” he said.

“Back in 2015, during the first International Investors Summit, we tried to convey the message that it was the time to invest in Cyprus and be part of what we saw becoming a success story of economic recovery. Having been proven right, today we stand before you and reassure you that now is the right time to invest in the country’s strong growth potentials. Not only in the sectors of Property, Real Estate and Leisure, but in all of the economy’s promising industries”.

Natasa Pilides, CIPA Director-General and the Summit Chairperson, referred to nine compelling reasons for investors to choose Cyprus.
She highlighted economic growth, Cyprus’ favourable tax regime, and tax incentives for individual investors and companies “across the board.”

She also referred to the island’s young workforce, 55 per cent of whom have a tertiary degree, access to the EU, Cyprus’ strong business support services with more than 700 accounting firms, more than 2,700 lawyers and 160 law firms, and the high availability of modern affordable office space in all cities.

Road blighting Stonehenge to be buried in solstice-compliant plan