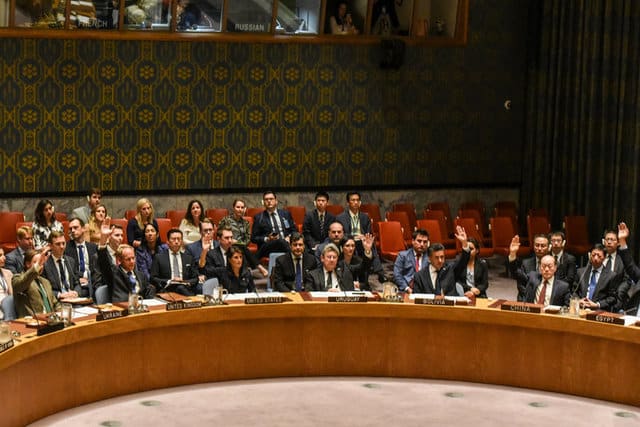 The United Nations Security Council unanimously stepped up sanctions against North Korea on Monday over the country’s sixth and most powerful nuclear test conducted on Sept. 3, imposing a ban on the country’s textile exports and capping imports of crude oil.

It was the ninth sanctions resolution unanimously adopted by the 15-member council since 2006 over North Korea’s ballistic missile and nuclear programs. A tougher initial U.S. draft was weakened to win the support of Pyongyang ally China and Russia.

“We don’t take pleasure in further strengthening sanctions today. We are not looking for war,” U.S. Ambassador to the United Nations Nikki Haley told the council after the vote. “The North Korean regime has not yet passed the point of no return.”

“If it agrees to stop its nuclear program, it can reclaim its future … if North Korea continues its dangerous path, we will continue with further pressure,” said Haley, who credited a “strong relationship” between President Donald Trump and Chinese President Xi Jinping for the successful resolution negotiations.

A week ago Haley called for the “strongest possible” sanctions, but after several days of negotiations, Washington dropped several measures to win the support of Russia and China, including a bid for an oil embargo and the blacklisting of North Korean leader Kim Jong Un and the national airline.

Russia had condemned the idea of tightening sanctions on North Korea without any political push to resolve the crisis. Russia’s U.N. ambassador, Vassily Nebenzia, told the Security Council on Monday that Moscow supported the resolution because “leaving nuclear tests without a firm reaction would be wrong.”

He again raised the Chinese and Russian proposal of a dual suspension of North Korea’s nuclear and ballistic missile testing along with U.S. and South Korean military exercises in a bid to kick-start talks. Haley has dismissed it as insulting.

“We think it’s a big mistake to underestimate this Russia, China initiative,” Nebenzia said. “It remains on the table at the Security Council and we will insist on it being considered.”

There was new political language in the resolution urging “further work to reduce tensions so as to advance the prospects for a comprehensive settlement.”

China’s U.N. ambassador, Liu Jieyi, called for a resumption of negotiations “sooner rather than later.” He called on North Korea to “take seriously” the will of the international community to halt its nuclear and ballistic missile development.

Pyongyang warned the United States on Monday that it would pay a “due price” for spearheading efforts on U.N. sanctions.

“The world will witness how (North Korea) tames the U.S. gangsters by taking a series of actions tougher than they have ever envisaged,” the foreign ministry said in a statement carried by the official KCNA news agency.

Japanese Prime Minister Shinzo Abe said after the council vote that it was important to change North Korea’s policy by imposing a higher level of pressure on the country than ever before.

In negotiations on the latest resolution, diplomats said Russia had questioned what leverage the Security Council would have left if North Korea continued to conduct nuclear and missile testing.

“This is a compromise in order to get everybody on board,” French U.N. Ambassador Francois Delattre said of the draft ahead of the vote.

North Korea is now banned from exporting textiles – its second-biggest export after coal and other minerals in 2016, totaling $752 million, according to data from the Korea Trade-Investment Promotion Agency. Nearly 80 percent went to China.

The resolution imposes a ban on condensates and natural gas liquids, a cap of 2 million barrels a year on refined petroleum products, and a cap on crude oil exports to North Korea at current levels. China supplies most of North Korea’s crude.

Chinese officials have privately expressed fears that an oil embargo could risk causing massive instability in its neighbor. Russia and China have also expressed concern about the humanitarian impact of strengthening sanctions on North Korea.

Haley said the resolution aimed to hit “North Korea’s ability to fuel and fund its weapons program.” Trump has vowed not to allow North Korea to develop a nuclear missile capable of hitting the mainland United States.

“This resolution also puts an end to the regime making money from the 93,000 North Korean citizens it sends overseas to work and heavily taxes. This ban will eventually starve the regime of an additional $500 million or more in annual revenues,” Haley said.

The resolution also calls on states to inspect vessels on the high seas, with consent of the flag state, if they have reasonable grounds to believe the ships are carrying prohibited cargo.

Traditionally, the United States has discreetly negotiated with China on any North Korea sanctions before expanding talks to the full council once the five veto powers have agreed. More recently this has typically taken one to three months.

But after the latest nuclear test, Haley took a more public approach, announcing a week ago that she would circulate a draft resolution to all council members and that she intended to call for a vote on Sept. 11.

“We wanted those who would be inclined to water down the text to own that position,” said the U.S. official.

North Korea was condemned globally for its latest nuclear test on Sept. 3, which it said was of an advanced hydrogen bomb.

The tensions have weighed on global markets, but there was some relief on Monday among investors that North Korea refrained from conducting another missile test this past weekend to celebrate 69 years since its founding.

Rock history on screen in Nicosia for one night