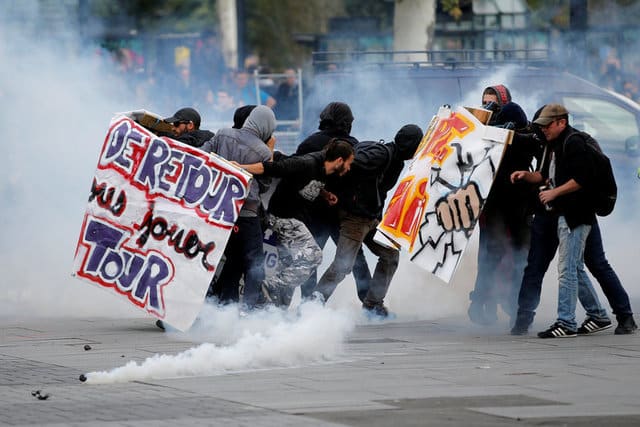 French Prime Minister Edouard Philippe has shrugged off nationwide protests against planned reforms to France’s strict labour regulations, saying on Wednesday he was “listening” but would nonetheless press ahead with the bill.

In a sign that popular protest could gain momentum, truck drivers belonging to France’s second and third largest unions said they would launch a rolling strike on Sept 25 to force the government into a reversal. Trucker strikes previously brought large parts of France to a halt, hurting the economy.

More than 200,000 trade unionists turned out on Tuesday for the first mass protests against the labour market reforms on Tuesday, part of a series of measures on Macron’s agenda for change. Others, including reform to the unemployment benefits and pension systems, are likely to be even more contested.

The government plans to adopt the decrees on Sept 22.

“I am listening and I am paying attention. But let me state that the French, when they vote, also have a right to be treated with respect,” Philippe told France 2 television. “And the reform that we are putting in place was announced by the president at the time of his election.”

Labour unions have thwarted previous attempts by governments on the political right and left to weaken France’s strict labour code. In a change of tack, Macron’s administration spent weeks negotiating its proposals with union bosses over the summer.

Last month, the government set out measures including a cap on payouts for dismissals judged unfair and greater freedom for companies to hire and fire. The reform makes no direct reference to the 35-hour week, a totem of the labour code, though it hands firms more flexibility to set pay and working conditions.

Macron, a 39-year-old former banker, inadvertently fuelled worker anger when he declared on a trip to Athens that he “would cede no ground to slackers, cynics and hardliners.”

The Elysee Palace said his comments were aimed at political leaders who had shirked ambitious reform in the past, but union leaders and political opponents on the left accused him of treating workers with contempt.

Protesters in cities across France hit back too. In Paris some carried placards reading “Slacker on Strike” while in Bordeaux demonstrators chanted: “Macron you’re screwed, the slackers are in the streets.”

Jerome Verite, secretary general of the CGT union’s transport federation on Wednesday told Reuters the truckers’ strike would “last as long as necessary.”

“We’re headed for a social disaster. We want the government to reverse course on its decrees,” he said.