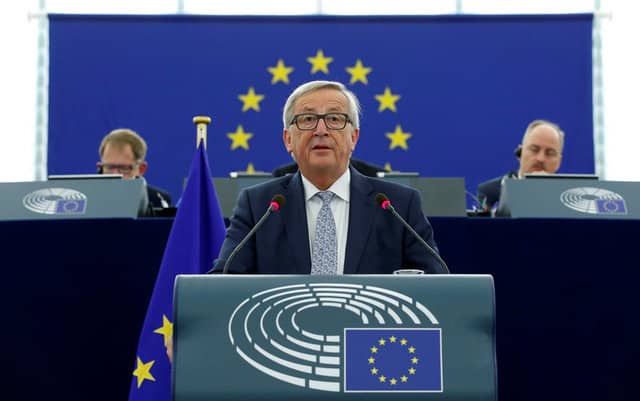 European Commission chief Jean-Claude Juncker called on EU governments on Wednesday to seize a window of opportunity from Brexit and economic growth to forge a tighter union built around the euro currency and a pivotal role in global trade.

In his annual State of the European Union speech, Juncker sketched out a vision of a post-2019 EU where some 30 countries would form a eurozone, with an EU finance minister running key budgets to help states in trouble.

Tax and welfare standards would converge and Europe, rather than the United States, would be the hub of a free-trading world.

The Commission president – effectively the EU’s chief executive – stressed his wish to heal divisions between eastern and western, poorer and richer member states; he sees that as vital to countering a drive, including by founding powers France and Germany, to set up new structures within the bloc that would exclude some ex-communist members.

“The wind is back in Europe’s sails,” Junker told the European Parliament, citing faster economic growth and the easing of a succession of crises — Greek debts, refugee crowds, Britain’s exit — that seemed to threaten the EU’s survival.

“Now we have a window of opportunity, but it will not stay open for ever,” he said, emphasising a need to move on from and even profit from the British vote to leave the bloc come 2019.

“We will keep moving on because Brexit isn’t everything, it is not the future of Europe,” he said in a speech that Brexit supporters said showed they were right to take Britain out of a bloc set on creating more powerful, central institutions.

In a carefully balanced, hour-long discourse in Strasbourg, he called on nationalist eastern leaders — though not by name — to stop defying EU courts over civil rights, and on westerners to drop attempts to keep out cheaper eastern workers or palm off inferior food products in poorer national markets.

But his core proposal for countering what is known as a “multispeed Europe” by encouraging all states to join the euro and other EU structures faces resistance in both non-eurozone countries and potentially in Paris and Berlin, where the newly elected President Emmanuel Macron and about to be re-elected German Chancellor Angela Merkel are readying their own plans.

“If we want the euro to unite rather than divide our continent, then it should be more than the currency of a select group of countries,” Juncker said. “The euro is meant to be the single currency of the European Union as a whole.”

He noted that only long-standing EU members Britain and Denmark have a legal right not to adopt the euro. EU officials say that with Britain leaving, and the eight remaining non-euro states accounting for only 15 percent of EU GDP, Juncker sees it as natural for EU and eurozone policy to operate in unison.

For that reason, he rejected proposals, led by France for a special eurozone budget, finance minister and parliament. These functions, he said, should be filled instead by a vice president of the Commission, chairing the Eurogroup of 19 eurozone finance ministers and managing a eurozone budget that would be part of the budget for the whole EU, overseen by Parliament.

While Denmark in fact pegs its crown closely to the euro, a drive to push the likes of Poland and Sweden into the euro would be a hard sell in those countries, while Germany, France and others have been sceptical about letting poorer states join yet.

Juncker proposed EU funding and technical help to encourage non-euro members to get themselves into a position to join.

Along with a call for national governments to drop some veto powers over taxation rules and foreign policy, and a proposal to merge his own office with that of the European Council president who chairs summits of national leaders, Juncker’s agenda carried a strong flavour of Brussels centralism for the EU’s critics.

For Juncker, officials say, the departure of Britain, for all the difficulties it brings, means goodbye to the major power that has continually sought opt-outs from new integration projects, and offers an opportunity to end the habit for good. “Everyone should be in everything,” one senior official said.

Eurosceptics responded to the speech by denouncing what they say is an anti-democratic EU.

“The message is very clear, Brexit has happened, full steam ahead,” said Nigel Farage of the UK Independence Party. “All I can say is thank God we’re leaving.”

Farage’s allies cheered when Juncker finally mentioned Brexit near the end of his speech and said the British would come to regret their “tragic” referendum decision to leave.

Looking ahead to March 30, 2019, the day when Britain will be out of the Union, Juncker said he had proposed that Romania, which will have the rotating presidency of the EU at the time, should host a summit of the 27 other leaders in the formerly German-speaking Transylvanian city of Sibiu. There, he said, they should set out plans for a more united Union, two months before voters will elect a new European Parliament.

He called on Europeans not to fall short in ambition for integration projects and to make haste, now that a succession of economic, financial, migration and Brexit crises was fading and the popularity of eurosceptic parties had waned.

“We started to fix the roof. But we must complete the job now that the sun is shining,” Juncker concluded.

“Because when the next clouds appear on the horizon – and they will – it will be too late.”

Pogba faces spell on the sidelines with hamstring injury