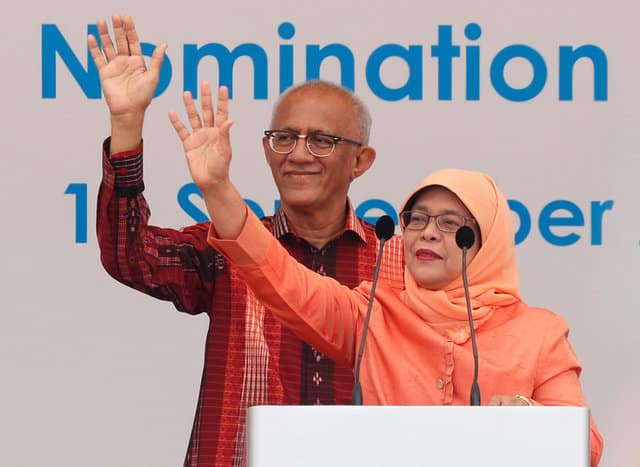 Singapore named a former speaker of parliament as the multicultural city-state’s first woman president on Wednesday while critics expressed dismay that other candidates were disqualified and the election went uncontested.

Aiming to strengthen a sense of inclusivity, Singapore had decreed the presidency, a largely ceremonial six-year post, would be reserved for candidates from the minority Malay community this time.

Of the four other applicants, two were not Malays and two were not qualified to contest, the elections department said on Monday. Halimah had automatically qualified because she held a senior public post for over three years.

If the election had been held, all citizens would have been eligible to vote.

Several critics went online to protest against the stringent eligibility rules, which include a stipulation that a candidate from the private sector should have headed a company with paid-up capital of at least S$500 million ($370 million).

The prime minister’s office said it had no comment on criticism of the election process.

“It would have restored some of the lost moral authority by her winning against credible opponents through popular votes,” said opposition politician Yee Jenn Jong in a blog post.

“She is, after all, a veteran in elections and has won handsomely in the four general elections she stood in.”

The rights group Association of Women for Action and Research (Aware) said it hoped “more will be done to improve access to politics for all of Singapore’s women”.

“Unfortunately, the process that led to this outcome has not reflected our hopes,” it said in a statement posted online.

Displays of dissent are rare in Singapore, one of the richest and most politically stable countries in the world. It has been ruled by the People’s Action Party (PAP) since independence in 1965 and the current prime minister, Lee Hsien Loong, is the son of the country’s founding father Lee Kuan Yew.

In the 2015 general election — held months after the death of Lee Kuan Yew — the PAP won almost 70 per cent of the popular vote and swept all but six of parliament’s 89 seats.

The incoming president, who is to be sworn in on Thursday, appeared unfazed by the controversy.

“Although this is a reserved election, I’m not a reserved president,” Halimah said in a speech at the election nominations office. “I’m a president for everyone.

“Whether or not there is an election or no election, my promise is to serve everyone and I will serve with great vigour, with a lot of hard work, with the same passion and commitment.”

Turkey ‘will take own security measures after Russia defence deal’