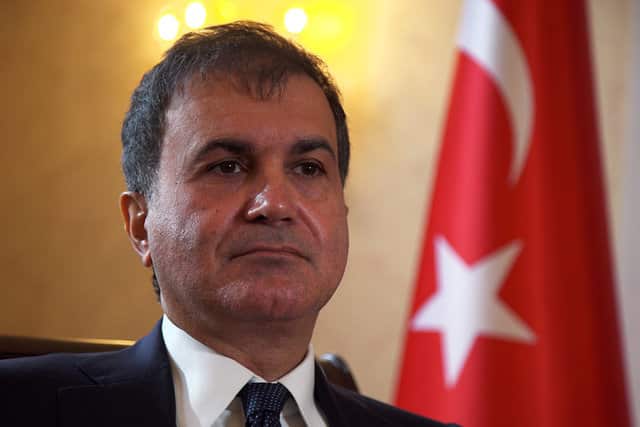 Turkey feels betrayed by European Union leaders who have called for the end of accession talks but it still hopes eventually to join the bloc, Turkish EU Minister Omer Celik said on Thursday.

The European Union has become increasingly critical of Turkey’s membership drive since President Tayyip Erdogan launched a crackdown on critics – including journalists and academics – after a failed 2016 coup.

Erdogan accused Berlin of “Nazi-like” tactics in March when it prevented Turkish ministers speaking at rallies in Germany. Chancellor Angela Merkel said in an election debate ten days ago that it was clear Turkey should not join the EU and accession talks should end, despite it being a crucial Nato ally.

Celik chided European Union leaders over their statements on Turkish accession and said some, such as Merkel, were using the criticism to deflect attention away from the EU’s internal problems such as Brexit, migration and reform.

“They put all those aside and they stoke antagonism towards Turkey in order to cover up their vital internal problems,” Celik told Reuters in an interview.

“We are indeed disappointed by Merkel and some others in the EU: at one of the hardest times in our history we were left alone by our friends and allies,” he said through a translator.

When asked if Turkey felt betrayed, he said: “Yes”.

The abortive coup, in which more than 260 people were killed as mutinous soldiers commandeered fighter jets, helicopters and tanks in a bid to seize power, has deepened a rift between Ankara and its Western allies.

Turkish officials said some Western allies were far too slow in showing solidarity with Erdogan after the coup which they cast as a well-planned attempt to subvert Turkish democracy.

Since then, some 50,000 people including journalists, opposition figures, civil servants and others have been detained. The crackdown has alarmed rights groups and some of Turkey’s Western allies.

Celik said that EU leaders such as Merkel had failed to keep their promises to Turkey on its EU bid which began in 1987 with an application to join what was then the European Economic Community. Turkey’s accession negotiations began in 2005.

“The EU has failed to keep all of its promises whereas Turkey has delivered on all of the promises it made,” Celik said.

Jean-Claude Juncker, president of the European Commission, said on Wednesday he saw no prospect of Turkey joining the EU in “the foreseeable future”.

“What has Mr Junker done, what giant strides has he made, to find solutions to bring the EU and Turkey closer? That is my question for Mr Juncker,” Celik said.

“If Germany keeps giving orders to the EU institutions – such as cutting negotiations with Turkey – then it will strengthen the hand of racist groups in Europe,” he said.

Formally ending Turkey’s accession negotiations would require unanimity among EU states, which is lacking, though majority backing is enough to suspend them.

Celik suggested that a leaders summit of the EU and Turkey be called to improve relations.

“Turkey has not given up on its target to be a full member of the EU: We are eager and willing to find solutions to move forward,” he said.

EU leaders will discuss Turkey at a summit in Brussels in October, though any formal decision on its future may not come before next spring.

Love or hate: hosting tourists in a global age