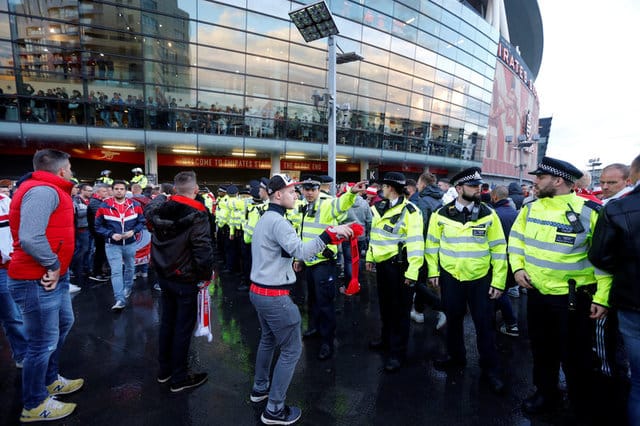 More than 20.000 FC Cologne fans descended on The Emirates, the large majority without tickets

Arsenal recovered from a goal down to beat FC Cologne 3-1 after crowd disturbances in London, while AC Milan’s new signing Andre Silva scored a hat-trick in a rousing 5-1 win at Austria Vienna as the Europa League group stage got underway on Thursday.

Fellow Serie A sides Atalanta and Lazio also won while Portugal’s Vitoria Guimaraes began their match against Salzburg with not a single European player in the team.

Arsenal’s Group H match was delayed by an hour as about 20,000 Cologne supporters fans descended on The Emirates, most without tickets, before kick off as their team returned to European competition for the first time in 25 years.

The reports added that the number of away fans around the stadium was preventing home supporters getting in, although the Arsenal fans were eventually able to enter the stadium.
The Metropolitan Police said extra officers had been sent to the stadium after scuffles broke out before kick-off.

A police statement said: “Officers are dealing with disorder at the Emirates Stadium where fans have gathered for the Arsenal vs FC Koln match. A policing plan is in place for the game. Additional officers have been deployed.”

The police later said four people had been arrested “on suspicion of public order offences”.

Asked if the number of Cologne fans at the match was a surprise, Arsenal manager Arsene Wenger told reporters: “They were very clever. I don’t know how they managed to infiltrate our fans and get everywhere but they did that very well.”

“Were the problems created by people who had no tickets? I don’t know. But certainly they (Cologne) had more people here than tickets so that was certainly the cause,” he said at the post-match news conference.

“I’ve followed German football for a long time and I thought Cologne had not played in Europe for 25 years. On the first night they go out (to play), they spoil their night. I couldn’t understand that.”

There were also scuffles between fans and when the action finally started, Arsenal fell behind to a stunning long-range strike from Jhon Cordoba before second-half goals from Sead Kolasinac, Alexis Sanchez and Hector Bellerin rescued the win.

Milan’s Portugal forward, signed from Porto in the close season, enjoyed a prolific night as he became the first player to score a European hat-trick for the seven-times European champions since Brazilian Kaka against Anderlecht in 2006.

Hakan Calhanoglu set Milan on their way with a fierce drive in the seventh minute and then set up Silva’s first two goals in the 10th and 20th of the Group D game.

Although Alexandar Borkovic pulled one back two minutes after the break, Silva completed his treble in the 56th minute after being sent clear by Franck Kessie’s through ball. Suso added the fifth just after the hour before Milan eased up.

Andrea Masiello tapped the ball in from a corner after 27 minutes before Alejandro Gomez rifled home a shot from the edge of the area in the 41st and Bryan Cristante added the third three minutes later after Everton were caught in possession.

“I have been waiting for this moment for a lifetime,” said Argentine Gomez. “I’m not a young kid anymore so to play my first Europa League match at 29 and beat Everton is very emotional.”

Olympique Lyonnais were held 1-1 at Apollon Limassol in the group’s other game after Adrian Sardinero Corpa got a last-gasp equaliser for the Cypriots to cancel out Memphis Depay’s 53rd minute penalty.

Braga pulled off a shock in Group C by coming from behind to win 2-1 at Hoffenheim, who had beaten German champions Bayern Munich in the Bundesliga on Saturday.

Sandro Wagner gave Hoffenheim the lead in the 24th minute but Joao Carlos Teixeira headed the equaliser on the stroke of halftime from a cross by Ricardo Esgaio who also set up the winner for Dyego Sousa five minutes after the break.

Lazio came from behind to win 3-2 at Vitesse Arnhem in Group K to complete a perfect night for three Serie A teams. Ciro Immobile scored their second goal, taking his tally for the season to seven in five games in all competitions.

In the group’s other game, Nice thumped Zulte-Waregem 5-1 in Belgium with Alassane Plea scoring the first two goals, followed by a third from Dante and one from Allan Saint-Maximin before maverick striker Mario Balotelli wrapped up the win.

Guimaraes fielded four Brazilians, three Colombians, one Uruguayan, one Peruvian, one Ghanaian and one Ivorian against Salzburg who are in the Europa League again after a 10th successive failure to reach the Champions League.

Brazilian Pedrao put Guimaraes ahead in the Group I game before Valon Berisha levelled for the Austrian champions.