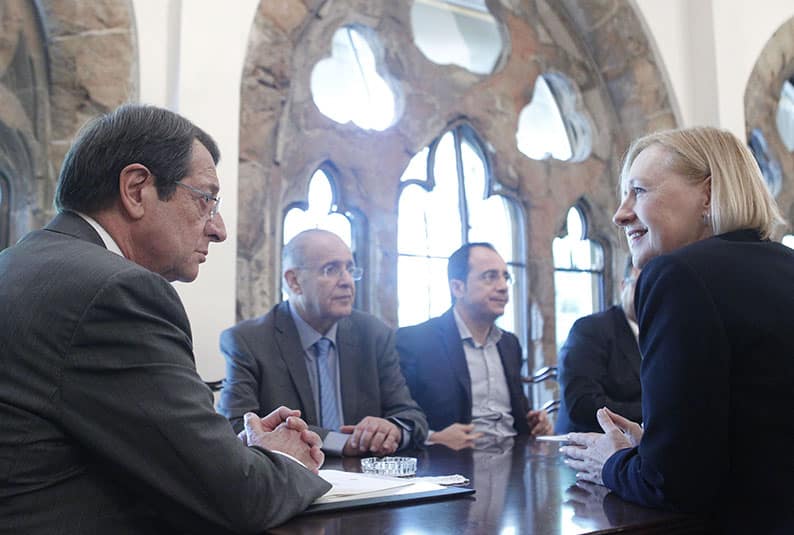 AS President Nicos Anastasiades prepares to depart for New York on Sunday to attend the United Nations General Assembly, during which some feel there could be a small window to the resumption of stalled talks for a settlement of the Cyprus problem, an interview to state broadcaster CyBC on Friday caused a political stir at home.

This meeting, along with Guterres’ meeting with Turkish Cypriot leader Mustafa Akinci, is expected to determine whether a resumption of talks, which came to a halt after a failure to strike a deal at Crans Montana, Switzerland, last July, could be in the cards.

Following separate meetings with both leaders on Friday, Guterres’ special representative in Cyprus Elizabeth Spehar said the secretary-general wants to hear “concrete ideas on the way forward” from the two leaders.

Meanwhile, Turkish Foreign Minister Mevlut Cavusoglu repeated on Friday that the effort for a comprehensive settlement of the Cyprus problem, which started in 2008, ended at Crans Montana in July.

At the conference in Switzerland, Cavusoglu said, Turkey “showed the required will to achieve a solution based on bizonality, bicommunality, and political equality for the two sides”, but the “Greek and Greek Cypriot duo did not respond to the extent necessary”.

“The conference had no result and was closed,” he said.

“Thus, the process of substantive talks that started in 2008 has ended.”

Against this backdrop, Anastasiades opted to give a televised interview that raised a political firestorm.

He repeated that the Greek Cypriot side “is ready to negotiate within the framework laid down by the secretary-general”, provided it will be an “inter-connected set”.

“There cannot be a separate deal on internal issues while the issues of guarantees, intervention rights, and the presence of guarantees remain outstanding,” he said.

Any new conference, Anastasiades warned, must be well prepared, arguing against a Crans Montana-type make-or-break dinner.

“You can’t expect a final deal at a dinner, without any preparation,” he said.

“In the end, due to this lack of preparation, we saw an effort to build on impressions formed – which proved false, a misdirection relative to the true intentions. There should have been better preparation.”

He was referring to Cavusoglu’s alleged pledge to Guterres at Crans Montana, during their bilateral meeting, to meet Anastasiades’ demands on security and guarantees, which he reportedly denied at the dinner, when he was asked to put it in writing.

“This, in itself, is proof that, if Turkey meant what it supposedly pledged to, it would have stated its readiness to resume talks based on the secretary-general’s parameters,” he said.

“The view [Turkey and Akinci] will present to the secretary-general [at their meeting on the sidelines of the general assembly] will be the real test. Without Turkey’s contribution, the Cyprus problem cannot be solved.”

On criticism that he offered rotating presidency despite earlier pledges that he would not accept it, Anastasiades hit back by citing former President Tassos Papadopoulos.

“We accepted the rotating presidency clause 20 years ago,” he said.

“On April 12, 2005, while we [at the National Council] were discussing with the late Tassos Papadopoulos the changes we would propose to the Annan Plan, he said he would not raise the issue of rotating presidency because that would shift the balance of the plan.”

What he had pledged to do, Anastasiades claimed, was “not give rotating presidency unless I have made sure we are finally becoming an independent state”.

The interview sparked the reaction of various political parties.

“Vague statements for public consumption will not convince the secretary-general to involve himself with the Cyprus problem,” Akel spokesman Stefanos Stefanou said.

“The secretary-general is expecting to hear how the Greek Cypriot side approaches the latest developments on the Cyprus problem. What will Mr Anastasiades tell him?”

In turn, this prompted a response by ruling Disy, in which spokesman Prodromos Prodromou claimed Akel continues to criticize our side, even in the face of Turkey’s stated intent to seek a solution “outside UN parameters”.

“As [Anastasiades] has said, he will express the Greek Cypriot side’s readiness to resume negotiations to the UN secretary-general in writing,” Prodromou said.

“What else, we wonder, does Akel want?”

In a particularly harshly-worded statement, the Solidarity movement lambasted Anastasiades’ defence of his agreement to acknowledge rights to some users of properties owned by Greek Cypriots displaced in 1974, in which he pointed to the rulings of the European Court of Human Rights.

“No refugee has authorized you to hand over his property to the user-usurper, and every refugee maintains his inalienable right to resort to justice himself to reclaim his violently seized property by your interlocutors and friends, the Turkish invaders, since the official state is capitulating without a fight,” Solidarity said.

Number of prostate cases on the rise, but ‘curable’, says official