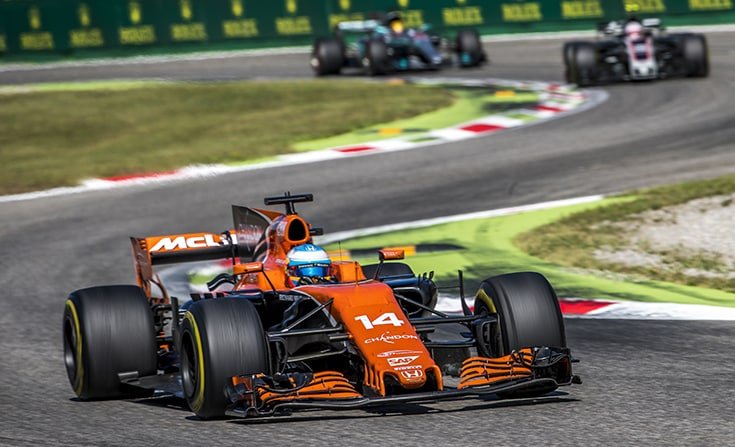 Formula One driver Fernando Alonso of McLaren-Honda in action

Former champions McLaren will swap their Honda engines for Renault ones at the end of the Formula One season after calling time on a troubled three-year partnership marked by frustration and failure.

Honda will stay in Formula One, replacing Renault as engine supplier to Red Bull-owned Toro Rosso whose Spanish driver Carlos Sainz moves to the French team on loan for the 2018 season.

The major shake-up, announced at the Singapore Grand Prix on Friday, ends McLaren and Honda’s dream of recreating the glory years of the late 1980s and early 90s when Ayrton Senna and Alain Prost were dominant.

“For a combination of reasons our partnership has not flourished as any of us would have wished,” McLaren executive director Zak Brown said in a statement.

“It is certainly not for the want of effort on the part of either Honda or McLaren, but the time has come to move ahead in different directions.”

Honda Motor Co. President Takahiro Hachigo expressed regret at a move that had become an open secret, and thanked Formula One’s owners Liberty Media and the governing FIA for their part in the dealmaking with Toro Rosso.

“It is unfortunate that we must part ways with McLaren before fulfilling our ambitions, however, we made the decision with a belief that this is the best course of action for each other’s future,” he said.

Fernando Alonso, the double world champion whose outbursts at Honda’s shortcomings have become a regular feature of race broadcasts, is expected to stay at McLaren.

The 36-year-old Spaniard, who won his world titles with Renault in 2005 and 2006, was not mentioned in the statements but has made having a competitive engine a key demand.

McLaren and Honda revived their partnership at the start of 2015 amid a burst of optimism but that bubble was swiftly pricked.

Honda has struggled to catch up with rivals and master the sport’s complex turbo hybrid engine regulations. McLaren are now ninth out of 10 in the constructors’ standings and have scored only 11 points from 13 races.

The team founded by the late New Zealander Bruce McLaren have won eight constructors’ championships, 12 drivers’ titles and 182 races but are without a victory since the end of 2012.

Brown said this month that the choice of engine partners, with Honda contributing more than $100 million a year to McLaren’s budget according to insiders, was one of the biggest decisions the team has had to make.

“Fortunately, we have extremely committed shareholders (so) that we can make a sporting decision and deal with the economics,” he said then.

Renault engines have powered Red Bull to six wins since the start of the Mercedes-dominated turbo-hybrid era in 2014, most recently with Australian Daniel Ricciardo at this year’s Azerbaijan Grand Prix.

McLaren will be hoping to be up there too next year and Renault, who have their own works team, looked forward to the challenge.

“This is a strategic decision,” said Renault Sport Racing president Jerome Stoll. “This alliance is not only technical and sporting, but also comes with marketing and communication benefits.

“We know that McLaren will push us hard on track and this competition will be to the benefit of all.”

The split also removes Honda from the intense and increasingly embarrassing scrutiny the manufacturer has endured.

“Honda and Toro Rosso will work as one team to strive for progress and a successful future together,” said Hachigo.

The stage helps us face our fears

Chinese GP to be called off due over coronavirus