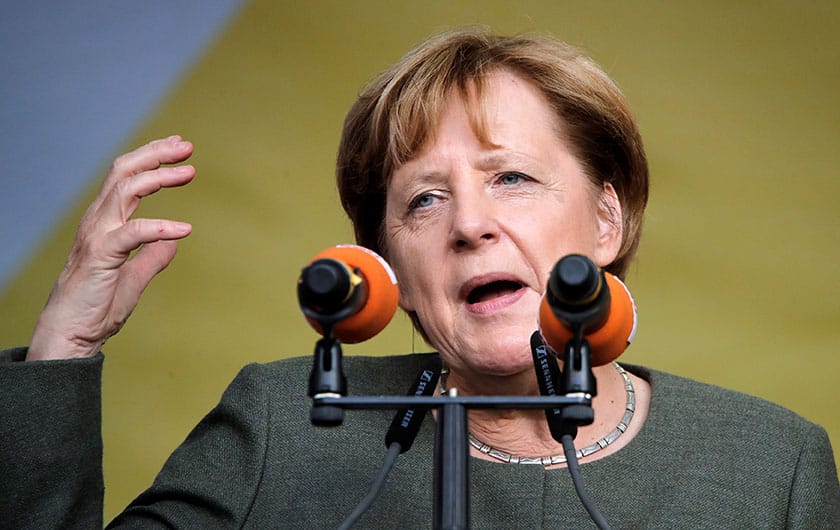 Germans choose a government on September 24, and that government is likely to be headed, for the twelfth year running, by Angela Merkel. The uncharismatic 63-year-old from East Germany may not have captured her fellow Germans’ hearts, but she has appealed so strongly to their rational selves that polls suggest they find no reason to replace her.

Under her chancellorship, Germany has changed in a fundamental sense. Her former advisor, Nikolaus Meyer-Landrut (now Berlin’s ambassador in Paris) told a small group two years ago that – according to Spiegel magazine – “today, with matters concerning the euro, Germany finds itself in a different position. It must now enforce a policy (of austerity) regarded by its partners as extreme. This unavoidably changes perceptions of the country.” “Enforce” and “extreme” are not words with which Germany has liked to be associated, and Merkel herself would never use them publicly. But Meyer- Landrut was telling the truth. Germany is Europe’s leader.

The fact that the German word for leader is “führer,” is a large reason for the sensitivities. The horrors which “Der Führer” Adolf Hitler and his Nazis visited on Europe, especially the Holocaust, remain driven deep into global consciousness. The swastikas displayed during a mid-August neo-Nazi march supporting Confederate statues in the US city of Charlottesville, Virginia, roused more disgust than other symbols because they have come to be shorthand for evil.

Yet the country that produced the führer and the Nazi party has embraced democratic practices and human rights more convincingly than many others – certainly more than other states that were allied with Nazi Germany. Since World War Two, successive German governments have striven to become models of civic behaviour most of all toward their European neighbours. The cleansing of the German psyche, the deliberate education of children about what Nazism meant, has had no parallels elsewhere.

Post-war generations of Germans had to learn “slowly and painfully and not always fully” to trust themselves, writes Ian Buruma in The Wages of Guilt (1994), his lucid treatment of how they dealt with the burden of Nazi infamy.

That self-trust has matured into a more openly proactive style, which a Merkel victory can be expected to continue unchallenged. The United Kingdom is set to leave the European Union, Italy’s febrile politics and its present economic weakness keep it from assuming a larger EU responsibility and the mid-sized countries like Spain – still pulling itself out of recession – and Poland – politically hostile to much of what the EU stands for even as it enjoys the EU’s largest allocation of funds – can only follow, however reluctantly, the German locomotive.

In France, where Emmanuel Macron is bidding to re-animate the German-French axis of EU power, the French president is on notice by Merkel, who won’t countenance his ambitious EU integration plans until he manages to implement controversial reforms at home.

In Germany right now, the campaign style is deliberately low-key and consensual. The recent debate between frontrunners, Merkel and the centre-left Social Democratic Party (SPD) candidate Martin Schulz, was “polite and cordial”, with none of the emotive storming common elsewhere in Europe. In part this is because the two parties may again form the coalition government in which they have collaborated, without much evident strain, for the past four years. In part it is because, as Wolfgang Streeck, director of the Max Planck Institute has noted, the SPD and Merkel’s Christian Democratic Union made up “a centrist national unity party into which the two former Volksparteien (people’s parties) have peacefully dissolved”.

Germany’s European partners now accept that Berlin is able to set and enforce the basic direction for the European Union – even if they don’t like the policies. Italian ministers, seeing some, albeit small, growth but weighed down still by heavy debt and fragile before any future world economic slowdown, complain long and loud about German-imposed austerity, with little effect.

The central figure in this has been, and may continue to be, Wolfgang Schäuble the German finance minister who has found a domestic popularity, seldom bestowed upon finance ministers, in insisting that EU states like France, Greece, Italy and Spain shape up by following the German example of reducing debt, improving productivity and reforming labour regulations. He has mooted the possibility of suspending still-struggling Greece from the euro zone. Merkel disagrees, but his popularity may mean he remains at the finance ministry if Merkel wins this month’s federal elections.

Schauble, confined to a wheelchair since a 1990 assassination attempt, sees monetary and fiscal rectitude as a moral issue. When, in 2016, he delivered an economy with the first balanced budget in more than four decades, he used this to show his own moral authority before EU finance minister colleagues who had not been able to approach his record.

His argument, that the euro-using states should be more like Germany, is gaining ground. Eike Schmidt, appointed in 2015 as the first non-Italian director of Italy’s premier art gallery, Florence’s Uffizi, abruptly announced earlier this week that he would resign in two years’ time, citing constant battles (and a lack of autonomy) in a sweeping criticism of Italian cultural bureaucracy. This is hardly German imperialism, but it is imperiousness, a dropping of the inhibition to criticise others because of Germany’s past, an insistence on efficiency supporting all exercises of public policy.

Germany does not, of course, carry the vast responsibilities of its leadership alone; it is careful to get majority northern support when battling with recalcitrant southern colleagues. It is the lodestar that, as Buruma wrote, trusts itself. In doing so, it has found the confidence to lead, and has shown that it has the capacity. But while the country may have earned those laurels in the 70 years since Nazism was buried in the rubble of Berlin, that doesn’t mean Merkel’s expected re-election will bring the integrated Europe she wants.

Our View: pain-free ways of reducing NPLs do not exist