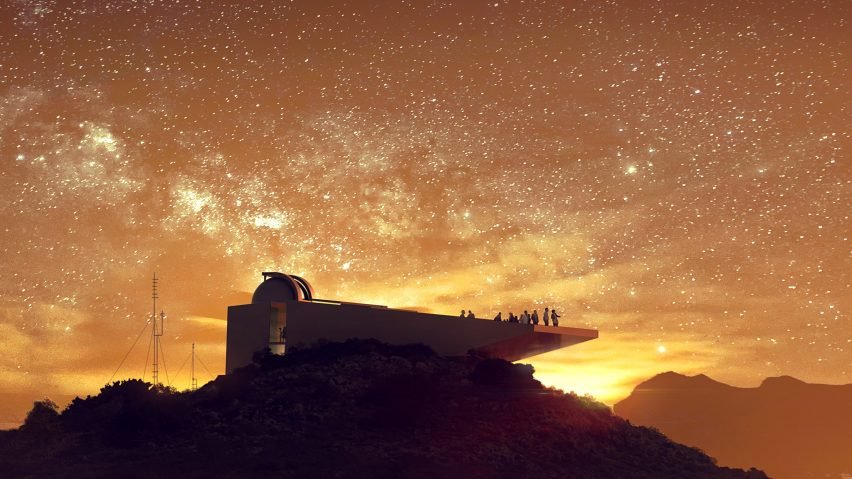 Architects' impression of the Troodos observatory

The mysteries of outer space will be incorporated into the design of the first purpose-built observatory in Cyprus, according to the architects for the proposed project.

Architects Nicodemus and Elena Tsolakis, whose design has won the planning permission for the astronomical research centre in the Troodos mountain range, have been inspired by science fiction movies, especially Star Wars for their blueprints.

“It is going to look like a spaceship which landed lightly and can take off any time,” Elena Tsolakis told the Sunday Mail.

“The ambition is that it is accessible day and night. A person who has equipment can dock it on the platform and can stay all night. There will be facilities like bathrooms and to make a coffee. Others can use the large telescopes.”

There will be two telescopes, a solar one for use during the day and a lunar one to watch the stars and moon at night. The idea is that different groups of people will be able to make use of the space.

“It will be a high-tech facility for people, especially children,” the architect added. “We want to interest young and old in space and the stars and scientists to be able to conduct research.”

It is important that there is minimal disturbance from other light sources, thus the observatory is going to be located on a mountain, at the height of 1,200 metres outside the small village of Agridia near Chandria.

An observatory on Troodos has support in the highest of places.

Greek astrophysicist for Nasa, Thanasis Economou, has emphasised the benefits of creating an observatory in Cyprus, especially for the young. “I promised to do everything I can so that there is a sky observatory in Cyprus, because this is an important project for many reasons, in particular for children who will become the future scientists and will be able to help their country,” he told the Cyprus News Agency last year.

“I hope that the idea will soon become a reality.”

President Nicos Anastasiades has also thrown his weight behind the project, most recently as he viewed a meteor shower in Troodos last month.

For the architects, the approval by the planning department was a big deal, as the building is unusual, but two more hurdles remain before construction can start.

First, a building permit has to be granted by the local authority. This, Tsolakis explained, is about the technical part, such as building materials and fire regulations. The architectural firm has not submitted this yet but hopes to go ahead soon.

The other hurdle is funding. An application to the EU for this has been approved by a committee, but a second, final, approval is pending and expected anytime. The decision is expected to be positive.

If it goes ahead, 90 per cent of the project will be paid for by the European Union and the rest by the Agridia community and the government.

It is not going to come cheap, as the equipment is expected to cost as much as the buildings. Figures for the amount needed are not yet available.

If all goes well, construction is expected to start early in 2018 and finish by the summer of 2019.

Whatever happens in future, the proposed observatory is already quite famous. An article about the project has already been published in Dezeen, the prestigious architectural magazine.

Elena and brother Nicodemus run Kyriakos Tsolakis architects, a firm established by their father. The architectural practice was founded in 1973 by Kyriakos Tsolakis in Melbourne where It was engaged in 520 projects around the city. The current practice in Cyprus opened in 2008.

Hamilton wins in Singapore with Vettel out