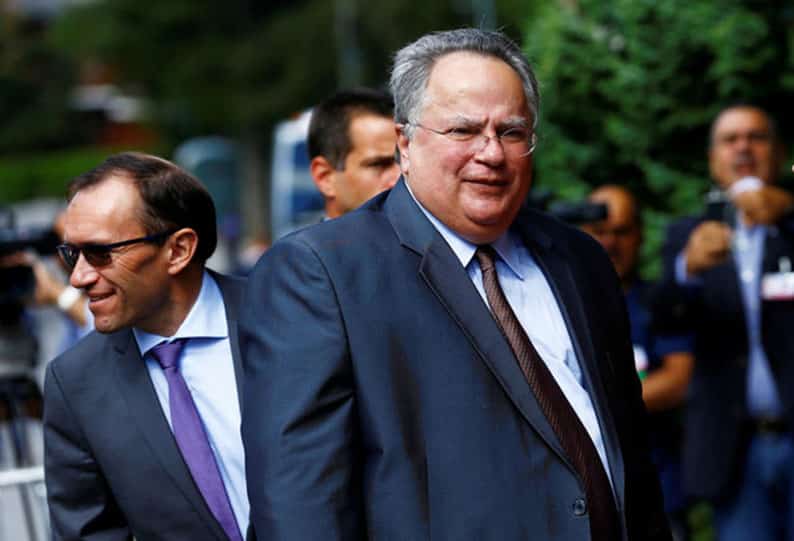 The gains from the framework for a solution to the Cyprus problem as laid down by United Nations chief Antonio Guterres must be preserved, Greek Foreign Minister Nicos Kotzias said on Monday.

Speaking to reporters after a 15-minute tete-a-tete with the UN secretary-general in New York, Kotzias said the Guterres framework was “the only UN document submitted” at July’s international Conference on Cyprus at Crans Montana, Switzerland, through which “one could abolish the Treaty of Guarantee and intervention rights”.

“Unfortunately, [at the dinner on the last day of the conference] this text was only discussed by myself and, partly, by Cyprus,” he said.

“It was not discussed by the other sides. It was, in a way, undermined by the British.”

The text, Kotzias added, is a “good basis for the continuation of our talks”.

Following the dramatic breakdown of talks in Crans Montana, Guterres ended the conference and announced the sides would enter a “period of reflection” before deciding on future moves.

Kotzias said the fact that as early as 2016 the talks were deemed “open-ended”, which he deemed a success of Greek diplomacy.

“At this time it seems that one of the sides is not willing to have a substantive conversation, which it also avoided at Crans Montana,” he said of Turkey.

“It is our duty to help solve the Cyprus problem to the benefit of the people of Cyprus, not any third country.”

Meanwhile, en route to New York for this week’s UN general assembly, on Sunday President Nicos Anastasiades addressed Cypriot expats in London, re-declaring his willingness to resume a structured dialogue for a solution.

On the sidelines of the annual gathering at UN headquarters, Guterres will have separate meetings with all parties involved in the Cyprus problem, the first since the Crans Montana failure and his call for reflection.

“What we are trying to do is keep hope alive, to create the conditions of resuming the dialogue on solid foundations,” Anastasiades said in a speech.

“The secretary-general’s parametres are there. The foreign powers must, at last, focus their efforts toward the party that is in violation of the first rule laid down by the secretary-general: that without solving security there can be no solution to the Cyprus problem, and that the security of one side cannot be a threat to the other.”

Despite the Greek Cypriot side’s best efforts at Crans Montana, Anastasiades insisted, “Turkey remained – contrary to the commitments it had undertaken before the secretary-general – completely intransigent”.

“Among other things, it demanded the future review – as opposed to a firm end-date – of guarantor rights, the stationing of 1,800 troops on the island, and a military base,” the president said.

“The more Turkey insists on having control over Cyprus, the greater our resolve against this eventuality will become.”

Anastasiades criticised former special adviser to the UNSG Espen Barth Eide for not preparing the talks on security and guarantees.

“In a possible new negotiation, someone must have, at last, worked to prepare an agenda, not just a dinner,” he said.

“Turkey’s intentions are not a matter for a mere dinner. You cannot expect to have results overnight. It is like inviting friends for dinner and not cooking in advance, waiting until everyone has arrived to ask them what they want to have for dinner. The end result will be a cacophony of varying desires, and everyone will be left hungry.”

Compromises with Turkish Cypriots are possible, he added, but only if Cypriots are assured control over their own destiny.

“We want to live in a functional state without guarantors,” he told Cypriot expats.

It could be a magical tribute band