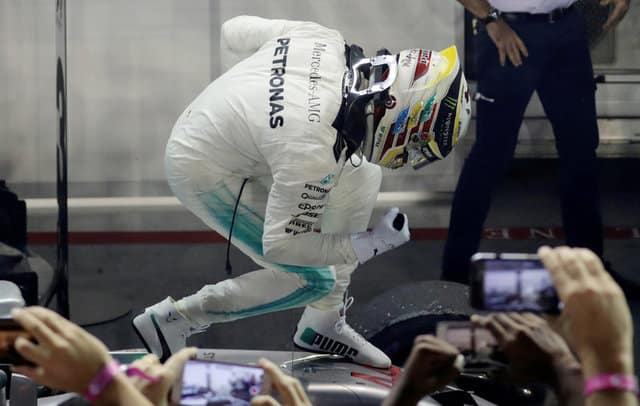 Formula One leader Lewis Hamilton needed a miracle going into Sunday’s Singapore Grand Prix and the Briton certainly got it on his way to an against-all-odds win at the Marina Bay street circuit.

The triple champion, starting fifth with three cars between him and pole-sitting title-rival Sebastian Vettel, had expected a tough evening of damage limitation.

Instead, the 32-year-old was granted rain that levelled the playing field, carnage at the start that took out Ferrari’s Vettel and a big break in the championship fight.

“God blessed me today, for sure,” Hamilton, who went into the race three points ahead of Vettel but came away with a 28-point cushion, said on the podium.

“As soon as it rained I knew where I was going to finish.”

Hamilton’s Mercedes had suffered from a distinct lack of pace around the twists of the 23-corner Singapore circuit in qualifying.

The layout played to Ferrari’s and Red Bull’s strengths and as the two teams fought for pole position, Hamilton never realistically looked like being in contention.

Heading into the weekend as the season’s first back-to-back winner, the Briton had been forced to put his hopes of a third consecutive triumph on ice.

But in the damp conditions, with Sunday’s race the first to be hit by rain in the decade that Singapore has hosted it, Hamilton’s Mercedes came into its own.

“It seemed to work in those trickier, cooler, slippier conditions,” Hamilton, who now has seven wins to Vettel’s four, told journalists.

He was even told at one point not to open too big a gap over Daniel Ricciardo’s pursuing Red Bull for strategic reasons.

Vettel’s failure to finish turned what Hamilton already expected to be a good day into a perfect one.

Contact between the pair sent Raikkonen spearing into the side of Vettel’s car and all three drivers were forced to retire.

The gap between Hamilton and Vettel is now bigger than it has ever been this season with six of the 20 races still to run.

The Briton will hold on to the overall lead even if he fails to finish the next race in Malaysia on Oct. 1 and Vettel wins.

“It couldn’t be a more perfect scenario, really, for us,” Hamilton said.

Military drills in show of force against N Korea (updated)

Hamilton has one last shot to avoid first winless season

Russell takes his first win in Brazil in Mercedes one-two