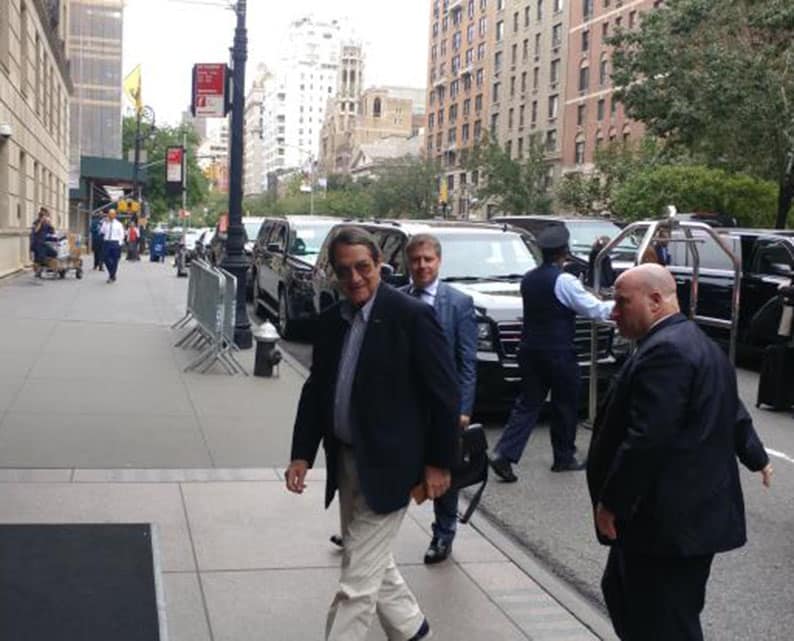 President Nicos Anastasiades, who is in New York for the UN General Assembly, and a meeting with UN chief Antonio Guterres said on arrival that the Turkish positions on the Cyprus problem were outside UN parameters and should cause concern.

Speaking to journalists, Anastasiades said he had reiterated to heads of state and government, as well as to UN Secretary-General Antonio Guterres, that the Greek Cypriot side was ready to negotiate in the framework set out by the UN chief.

This, he said, included the termination of the treaties of guarantee and any rights of intervention, and a timeframe for the withdrawal of Turkish troops.

Commenting on statements by Turkish Foreign Minister Mevlut Cavusoglu and the recent remarks by Turkish Cypriot leader Mustafa Akinci, Anastasiades said that he could only express the Greek Cypriot side’s positions and determination to strive for a solution, in the context of the UN, and the EU principles and values.

Regarding statements by Greek Foreign Minister Nicos Kotzias on the necessity to maintain the document put forward by Guterres in July, Anastasiades said that document had not been thoroughly discussed in Crans-Montana because of the tension created by the Turkish positions on the guarantees and intervention rights.

Asked what the options would be if Guterres reached the conclusion that there should be no preconditions in place to resume negotiations, Anastasiades said he did not believe Guterres would reach such a decision.

He also referred to the various meetings he would be having in New York with heads of state and government, and other officials, as well as the Jewish Lobby and overseas Cypriot and Greek organisations.

Anastasiades said the main aim was to discuss developments in the Cyprus problem, reiterate the Greek Cypriot’s determination for a solution, and point out the necessity for everyone to exert influence on Turkey.

The president wrapped up his first day in New York with a dinner hosted in his honour by the Cypriot community there. Government Spokesman Nicos Christodoulides also attended the dinner.

He will also attend separate receptions hosted by President of the European Council Donald Tusk and Donald Trump.