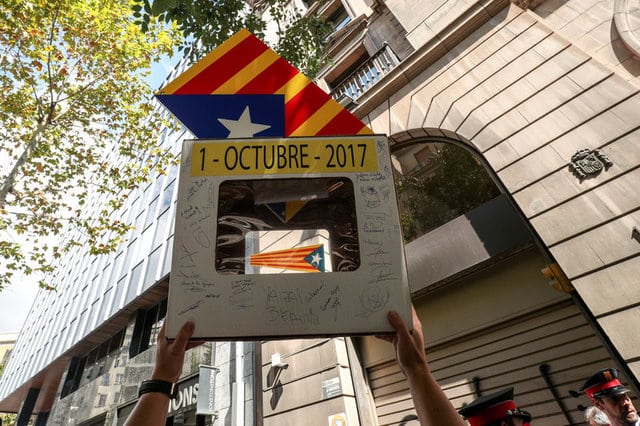 A ballot box with an Estelada (Catalan separatist flag) is held up outside the State Prosecutor's office as the Mayor of Catalan town Mollerussa Marc Solsona (not pictured) was received by supporters at the door after testifying in Barcelona, Spain, September 19, 2017

The first of hundreds of Catalan mayors summoned to answer questions on why they have backed a banned Oct 1 referendum on independence from Spain appeared before the state prosecutor on Tuesday amid cheers and chants from supporters.

The first three mayors to declare exercised their right to remain silent, the Association of Municipalities for Independence (AMI) said.

Years of separatist feeling in the industrial north-eastern region will come to a head in less than two weeks as the fiercely pro-independence regional government calls a referendum on splitting from Spain.

Madrid has declared the referendum illegal and the Constitutional Court has suspended the vote that was approved by the regional government earlier this month.

So far, 745 of 948 municipal leaders have said they will provide venues for the referendum.

“Voting is not a crime,” said Marc Solsona, mayor of the town of Mollerussa, one of nearly 750 mayors facing charges of civil disobedience, abuse of office and misuse of public funds, as he left the state prosecutor’s office in Barcelona.

“I’m just the mayor and I have to serve my people. I am committed to the people being able to vote on Oct 1 in accordance with the law passed by the Catalan parliament and what happens to me is not important,” he said.

Solsona smiled, kissed and gripped hands with dozens of clapping supporters gathered outside the state prosecutor’s office as he entered to chants of ‘You are not alone’.

“We consider ourselves privileged to have a mayor who represents the townspeople above any other interests – political or financial,” said 63-year-old pensioner Angel Tena, who had travelled to Barcelona to support the mayor.

Neither the police nor the interior ministry could confirm the raid, but footage showed dozens of people gathered outside the company’s offices chanting ‘Out with the occupying forces,’ handing out voting papers and laying carnations on police cars.

Although polls show less than half of Catalonia’s 5.5 million voters want self-rule, most in the wealthy north-eastern region want the chance to vote on the issue.