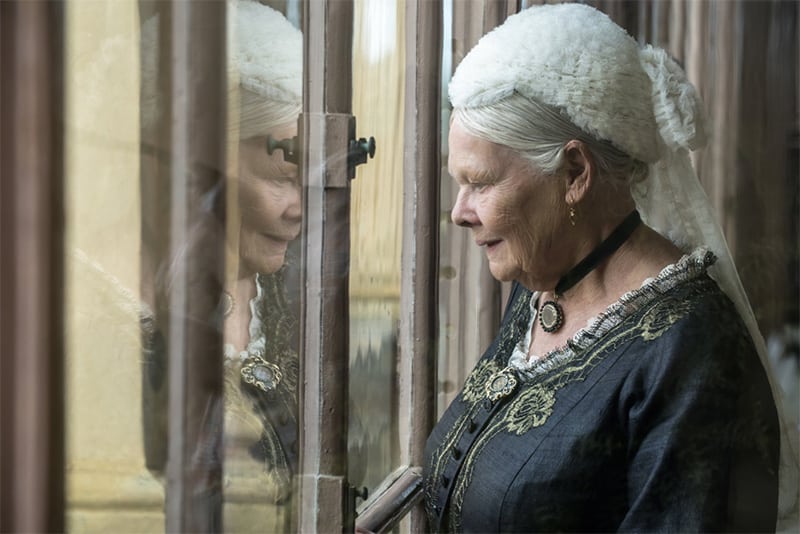 A Muslim taken into the confidence of the Queen of England, viewing Parliamentary papers, reading the Koran to her and putting ideas into her head? “What’s the Archbishop of Canterbury going to say?” That’s an incendiary, still-very-topical angle in Victoria and Abdul, a historical drama that sounds trite, nods in some surprisingly interesting directions as it goes, then settles (unsurprisingly) for lump-in-throat territory.

It does sound rather boring, a retread of Driving Miss Daisy or indeed Mrs. Brown, the 1997 film with the same actress (Judi Dench) playing the same character (Queen Victoria) in much the same plot, only minus the ethnic angle (unless Scotland counts as ethnic). The plot, roughly speaking, is the privileged person in a racist time who forges a close friendship with someone from the ‘other side’ and has their eyes opened – the outsider, in this case, being Abdul Karim (Ali Fazal), an Indian clerk who’s semi-randomly chosen to travel to England and present a gift to the Queen in a minor ceremony, catches the monarch’s eye and becomes her close advisor and munshi, or spiritual teacher. It’s a serviceable plot but rather glib, and of course moralistic.

Fortunately, both parties in Victoria and Abdul veer slightly from the usual stereotype. The Queen isn’t complacent, just deeply weary (Mrs. Brown took much the same tack), desperate for someone to distract her from the soul-crushing round of banquets and ceremonies. “Everyone I really loved has died,” she wails, “and I just go on and on!”. Dench is now 82, and her lined, furrowed face – eloquently observed in some startlingly intense close-ups near the end – has no vanity left, let alone concern for PC messages about multiculturalism. More importantly, Abdul isn’t quite the working-class sage typified by Morgan Freeman in Driving Miss Daisy. Instead he’s a wide-eyed, rather shallow young man who talks in platitudes and flowery hand gestures, thinks of life as “a big adventure” – and is also “rather handsome”, as the Queen notes and a lady-in-waiting independently confirms.

This is one of the interesting directions in which the film threatens to go: a frustrated, romantic old woman (we see her eyes light up when Puccini describes the plot of his new opera) falling for a total himbo with a pretty face and devoted manner. We see it later too, when Abdul casually mentions that he has a wife back in India, and the Queen is crestfallen: well, she says, this “changes everything”. That could make an interesting movie, especially if Victoria behaved like a jealous lover and cast him out (instead, she gets him to bring Mrs. Karim to England). There’s another interesting movie in the notion of an elderly monarch becoming irrational, her little whims – I want a mango, she commands, have one sent from India – growing increasingly excessive. And what if the object of desire were actually unworthy?

Alas, Victoria and Abdul never actually casts off its middlebrow shackles to create truly flawed characters – and its biggest failing is its biggest opportunity, Abdul himself. There’s something questionable about this character. For one thing, he has a sidekick, a grumpy friend who accompanies him from India and is much more political, calling the Brits oppressors and exploiters; the Queen assigns him, humiliatingly, to be Abdul’s servant – and he also suffers badly from the cold, his health deteriorating, yet Abdul never pleads with Victoria to send his friend back to India, or at least relieve him from being his servant. Then there’s the Muslim thing: Abdul’s wife is clad in a full-body burqa, which Victoria finds “splendid” – yet the wife is a non-character in the film, and Abdul also lies to the Queen (or did she just misunderstand? it’s not clear) about the role his fellow Muslims played in the Indian Mutiny. That’s a lot of dubious behaviour there – yet the film never calls him on it, nor does it admit that he may just be a fantasist preying on a deluded old woman.

I suspect I know what’s going on here. This is a true story, or semi-true (“Based on real events… mostly,” says an opening caption coyly); all evidence of Abdul Karim’s relationship with the Queen was destroyed by her son, Edward VII, but his journal was discovered in 2010 and the truth finally emerged. There’s no way the film can attack him, with that back-story, nor can it seem too critical of Muslims, given current sensitivities in Britain – so it simply makes him something of a blank, tentatively hints at the many red flags about his character (which might’ve made for a more intriguing film), and instead falls back on the tried and tested. Judi Dench being regal. Pompous twits, and the rest of the inner circle, being bigoted. A touching farewell, and a tender “Goodbye, my Queen”. A privileged person in a racist time who… well, you know.