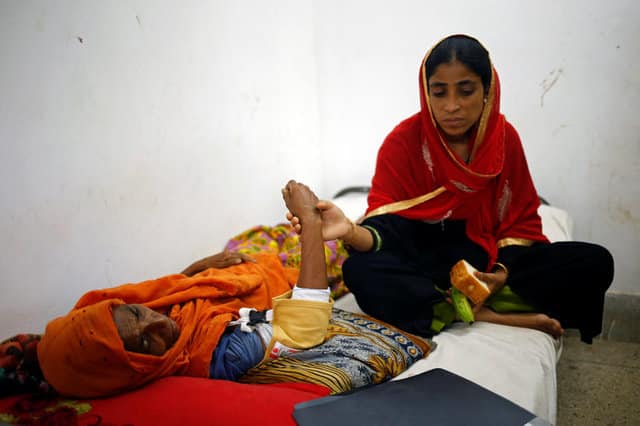 A relative holds the hand of an injured Rohingya refugee woman, who is receiving treatment at the Cox's Bazar District Sadar Hospital in Cox's Bazar, Bangladesh, September 19, 2017

Myanmar leader Aung San Suu Kyi has rejected a suggestion she is soft on the military, which the United Nations has accused of ethnic cleansing, saying her relationship with the generals was normal and her objective was national reconciliation.

Suu Kyi condemned on Tuesday rights abuses in Rakhine State, where conflict that began last month has forced 421,000 Rohingya Muslims to seek refuge in Bangladesh, and said violators would be punished.

However, in her first address to the Buddhist-majority nation on the crisis, she did not address UN accusations of ethnic cleansing by the security forces, drawing cool international responses.

“We’ve never changed our stand,” Suu Kyi said in an interview with Radio Free Asia, when asked if she had softened her stance on the military, which she challenged for years in her campaign for democracy.

“Our goal has been national reconciliation from the very beginning. We have never criticised the military itself, but only their actions. We may disagree on these types of actions.”

She cited her unsuccessful bid in parliament to change a military-drafted constitution, which bars her from the presidency and gives the military responsibility over security and a veto over charter reform.

“We’ll continue to bring changes within the parliament. I’ve stood firm with the military before, and still do now,” she told Radio Free Asia.

She again did not refer to the accusations that the military is engaged in ethnic cleansing.

Suu Kyi, the daughter of Myanmar’s independence leader who founded the army, has for years been feted in the West as a champion of democracy during years of military rule and house arrest.

But the Nobel Peace laureate has faced growing criticism for saying little about abuses faced by the Rohingya.

Rights monitors and fleeing Rohingya say the army and Rakhine Buddhist vigilantes have mounted a campaign of arson aimed at driving out the mostly stateless Muslim population.

The UN rights agency said it was “a textbook example of ethnic cleansing”.

Myanmar rejects the charge, saying its forces are tackling insurgents of the Arakan Rohingya Salvation Army who it has accused of setting the fires and attacking civilians.

Western diplomats and aid officials had been hoping she would issue an unequivocal condemnation of violence and hate speech in her first address on the Rakhine State conflict.

They welcomed the message, as far as it went, but some had been hoping for a stronger stand.

Suu Kyi condemned all rights violations and said she was committed to the restoration of peace and the rule of law.

On the return of refugees, she said Myanmar was ready to start a verification process under a 1993 arrangement with Bangladesh and “refugees from this country will be accepted without any problem”.

She also said diplomats could visit the conflict zone.

In a phone call to Suu Kyi, US Secretary of State Rex Tillerson welcomed Myanmar’s commitment to allow the return of refugees, but urged it to facilitate aid to those affected by the violence and to address “deeply troubling” rights abuse allegations, the State Department said.

US Deputy Assistant Secretary of State Patrick Murphy is in Myanmar this week. He will travel to Sittwe, the capital of Rakhine State, to meet government officials and representatives of different communities, but is not seeking to travel to the conflict zone.

China, which has close economic and diplomatic ties with Myanmar, has called for understanding of the government’s efforts to protect stability.

UN Secretary-General Antonio Guterres told the General Assembly Myanmar must end military operations, allow unhindered humanitarian access, and recognise the right of refugees to return and the grievances of the Rohingya.

Twenty-two members of the US Congress wrote to Tillerson calling for a “strong, meaningful” response. The head of the Senate Foreign Relations Committee, Bob Corker, said Suu Kyi risked destroying her reputation.

“She had yet another opportunity today to stand up for the Rohingya minority … but instead refused to acknowledge the military’s role in the ongoing atrocities,” he said.

Western governments that backed Suu Kyi’s campaign against military rule still see her as the best hope for Myanmar’s political and economic transition.

However, she has to avoid angering the army and alienating supporters by being seen to take the side of a Muslim minority that enjoys little sympathy in a country that has seen a surge of Buddhist nationalism.

Cypriot hunters ‘being hunted’ by the law, left ‘helpless and unprotected’, they say