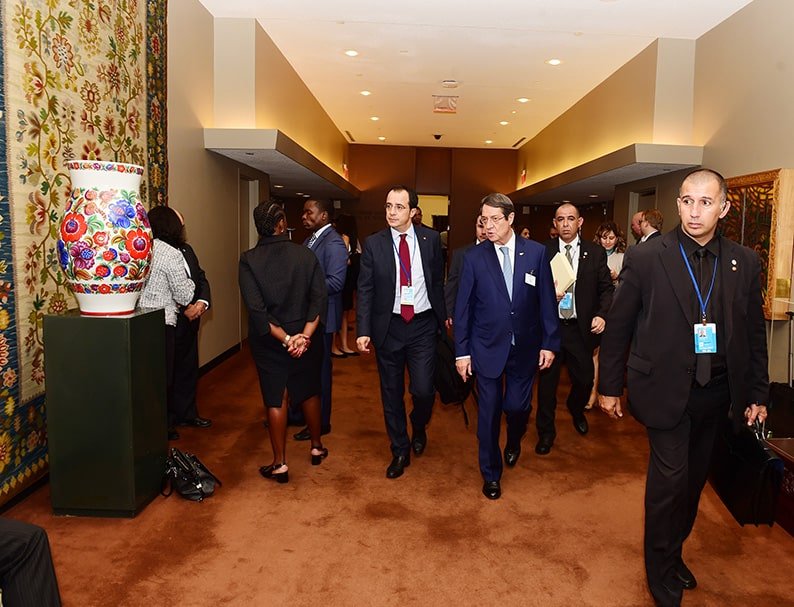 President Nicos Anastasiades has discussed the need for the continued presence of Unficyp on the island with the foreign ministers of two permanent members of the UN Security Council during his meetings in New York on Tuesday on the sidelines of the General Assembly.

In statements after the meetings, Government Spokesman Nicos Christodoulides said China and Russia would refer to the matter in the relevant discussions which will take place in the Security Council.

Referring to the meeting with Wang Yi, Christodoulides said that the Chinse foreign minister was briefed on recent developments in the Cyprus problem and expressed China’s appreciation for the thorough information contained in President Anastasiades’ letters.

“Bilateral relations were also discussed and it was agreed that China will promote actions soon that will enhance investments such as Chinese tourist visits to Cyprus, while it was also agreed to speed up discussions between the two countries for an avoidance of double taxation agreement,” he added.

Referring to Anastasiades’ meeting with his Egyptian counterpart Abdel Fattah el-Sisi, the government spokesman said it was confirmed that President el- Sisi would visit Cyprus on November 20, one day before a trilateral summit between Greece, Cyprus and Egypt.

“We are having preliminary discussion and possibly this trilateral meeting will open up to include one more country,” he said.

According to Christodoulides, the discussion also focused on regional developments and in particular those concerning the Gulf countries and how they affect the region.

“Energy matters were also discussed as well as a way to proceed with joint actions to the benefit of both people,” he said.

Referring to the meeting Anastasiades had with Lavrov, Christodoulides said the president had accepted an invitation extended to him by Russian President Vladimir Putin to visit Moscow between October 23 and 25.

“Preparatory work has begun for the signature of important agreements,” he noted.

He further referred to the matter of Unficyp and the need for its presence on the island to continue as long as there are no developments on the Cyprus issue.

On Tuesday afternoon, Anastasiades attended a reception hosted by British Prime Minister, Theresa May, and the Maltese Prime Minister, Joseph Muscat, in honour of the presidents and heads of states and governments. President’s agenda also included a short meeting with the British Prime with whom he discussed the Cyprus problem and Brexit.

Later on the day, President Anastasiades and First Lady attended the reception hosted by US President Donald Trump.