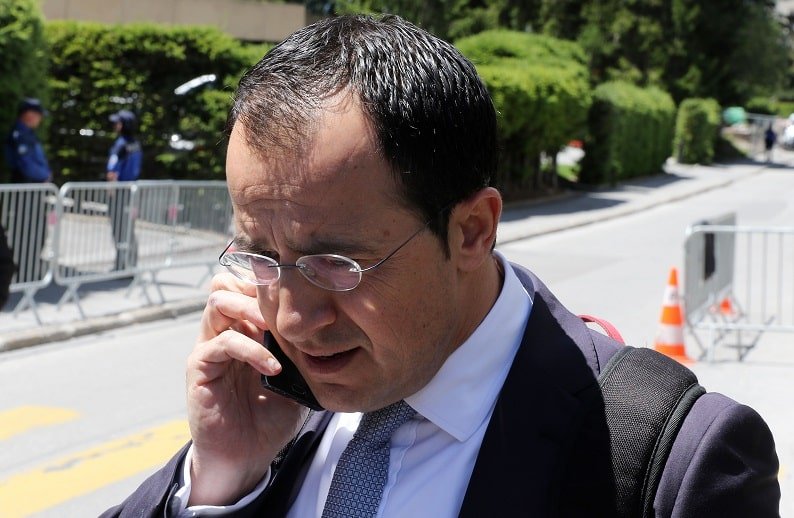 The government on Wednesday deflected questions over why the UN chief would have submitted a paper on a monitoring mechanism for implementation of a Cyprus solution if discussion on abolishing security and guarantees was already heading downhill during the Crans-Montana dinner.

Asked the question in an interview with Cybc, government spokesman Nicos Christodoulides said that would be a better question for the UN.

“We did not come to an agreement [on security and guarantees] in order for us to move to the next stage which would be the mechanism for implementing the solution. Only our side and the Greek foreign minister commented on this document,” he said.

The document, whose existence was revealed earlier in the week by Greek Foreign Minister Nicos Kotzias, mooted the replacement of the 1960 Treaty of Guarantee and the intervention rights of Cyprus’ guarantor powers with a UN-enforced mechanism for the implementation of a solution.

On Tuesday, President Nicos Anastasiades came under heavy fire from Akel for not disclosing it to the National Council, either then or since, though the government and Disy both said they had been told about it in Crans-Montana. Two more of the opposition parties also seemed to confirm this account on Wednesday.

Diko leader Nicolas Papadopoulos told Politis radio the document was touched on in the presence of Kotzias, who also made reference to it at the time.

Papadopoulos said he himself had even sent a letter to Anastasiades after that concerning its contents for which he was still awaiting a response.

Akel leader Andros Kyprianou told the same station: “We are not idiots,” and added that nothing was said about the document during the briefing of the members of the National Council in Crans-Montana.

The government spokesman said the document was only tabled by UN chief Antonio Guterres an hour into the Crans-Montana dinner. He said the Greek Cypriot side had been given a copy before that was passed to members of the negotiating team to discuss, and from there to the National Council.

“Unfortunately, the meeting did not produce an extensive follow-up because of the continuation of discussions focused on the security and guarantees until dinner,” he said. “And might I remind everyone that this idea was put on the table by our side long before Crans-Montana,” he added.

Citizens Alliance leader Giorgos Lillikas, when asked about it on Wednesday appeared to offer a plausible explanation, saying: “The truth is somewhere in the middle.”

References may have been made at the National Council, he said, “but since no documents were provided to be studied by the parties, it is reasonable to have this confusion.”

The government spokesman in his comments to Cybc insisted everyone was informed and this had now been confirmed by other party leaders. “Some may not remember it because there was no extensive discussion. The discussion [at the National Council] focused on the UN framework document and Turkey’s positions on security and guarantees,” he said.

On Wednesday, the row over the document degenerated into a wider spat between Akel and the government, which accused the party of electioneering.

Akel spokesman Stefanos Stefanou appeared to redirect the issue without further mentioning the National Council, but questioning why Anastasiades did not insist on discussing the document at the Crans-Montana dinner.

He said the fact that Guterres had tabled it at all meant that discussions at the dinner had not been exhausted.

“The excuse given by Mr Anastasiades is that there were tensions… but he failed to use every opportunity to compel Turkey to discuss this issue or be exposed,” Stefanou said, wondering whether this was why Anastasiades had tried “to conceal the existence of the document and its contents”.

A statement from the presidential palace in response said: “Akel insists on blaming President Anastasiades for the collapse in Crans-Montana for pre-election reasons, disregarding the consequences on our national issue.”