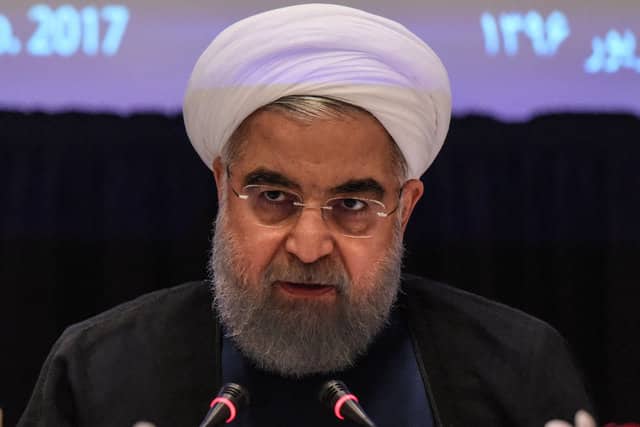 Iran vowed on Wednesday not to be the first nation to violate the Iran nuclear deal and said it did not expect the United States to abandon it despite President Donald Trump’s fierce criticism.

Trump, who on Tuesday called the 2015 international accord “an embarrassment,” said he had made up his mind whether to keep the pact but declined to disclose his decision.

Speaking at the UN General Assembly of world leaders, Iranian President Hassan Rouhani responded forcefully to Trump’s pugnacious speech on Tuesday by saying Iran would not be pushed around by a relative newcomer to the world stage.

But he also said Iran desired to preserve its accord with six world powers under which Tehran agreed to restrict its nuclear program for at least a decade in return for the loosening of economic sanctions that crippled its economy.

“The Islamic Republic of Iran will not be the first country to violate the agreement,” Rouhani said, adding that Iran would respond “decisively and resolutely” to a violation by any party.

“It will be a great pity if this agreement were to be destroyed by ‘rogue’ newcomers to the world of politics: the world will have lost a great opportunity,” he said in a dig at Trump, who on Tuesday called Iran a “rogue” state.

Speaking later to reporters, Rouhani said he did not think Washington would leave the nuclear deal and said any country that abandoned the pact would isolate and embarrass itself.

“We don’t think Trump will walk out of the deal despite (his) rhetoric and propaganda,” Rouhani said.

“If American officials think that they can pressure Iran by walking out of the deal, they are making a big mistake,” he added. “Either the nuclear deal remains as it is or it will collapse.”

Trump, a businessman and former reality TV star whose first elected office is the presidency, told reporters, “I have decided,” when asked if he had made up his mind after having criticised the accord in his own UN speech on Tuesday.

But he declined to say what he decided.

US officials have sent mixed signals about the nuclear agreement Iran hammered out with six major powers – Britain, China, France, Germany, Russia and the United States.

On Wednesday, US Ambassador to the United Nations Nikki Haley said Trump’s speech signaled “that he’s not happy with the deal” but not a decision to abandon the accord.

On Tuesday evening, however, US Secretary of State Rex Tillerson told Fox News that “if we’re going to stick with the Iran deal there has to be changes made to it.”

The Republican president hinted on Tuesday that he may not recertify the pact, negotiated by his Democratic predecessor, Barack Obama. “I don’t think you’ve heard the last of it,” he said.

Trump must decide by Oct 15 whether to certify that Iran is complying with the pact, a decision that could sink the deal. If he does not, the US Congress has 60 days to decide whether to reimpose sanctions waived under the accord.

Clues to the US stance might emerge on Wednesday when the seven parties to the agreement are to meet, marking the first time Tillerson and Iranian Foreign Minister Mohammad Javad Zarif are to meet in the same room.

The prospect of Washington reneging on the agreement has worried some US partners that helped negotiate it, especially as the world grapples with North Korea’s nuclear and ballistic missile development.

French President Emmanuel Macron said it would be a mistake to pull out of the pact. “We have to keep the 2015 agreement because it was a good one,” he told reporters.

Russia is also concerned by Trump questioning the deal, Foreign Minister Sergei Lavrov told reporters in comments published by his ministry on Wednesday.

Saudi Foreign Minister Adel al-Jubeir appeared to signal that his country, Iran’s major rival for regional influence, sought to see the pact strengthened, not jettisoned, and wanted Iran to scrupulously adhere to it.

“We believe that it must be strictly reinforced. Iran has not lived up to the terms of the agreement,” Jubeir told reporters. “We expect the international community to do whatever it takes to make sure Iran is in compliance with it.”