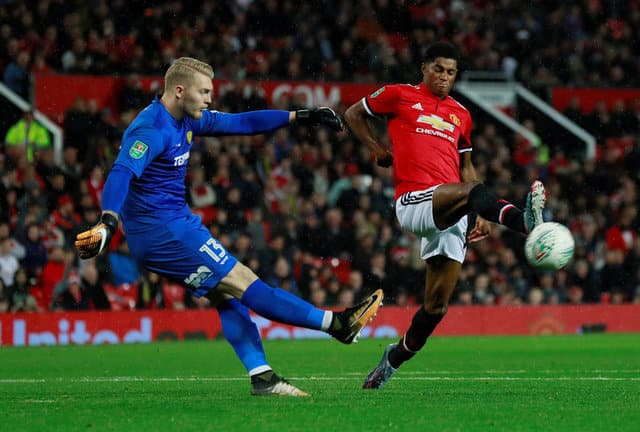 Marcus Rashford scored twice as holders Manchester United brushed aside second-tier Burton Albion 4-1 at Old Trafford to reach the fourth round of the League Cup on Wednesday.

The 19-year-old England striker produced two lethal finishes in the opening 20 minutes and Jesse Lingard killed the tie off before halftime with a deflected effort.

Anthony Martial got in on the act after the break before Lloyd Dyer grabbed a stoppage-time consolation for Burton.

Manchester City, Chelsea and Arsenal also progressed, as did Everton who ended a run of four consecutive defeats with a welcome 3-0 home victory against second-tier Sunderland.

United have now scored 17 goals in five home matches this season in all competitions, although Burton became the first of those visiting sides to score at Old Trafford.

It was only a minor irritation as United produced a vibrant display with Rashford, leading the line instead of rested Romelu Lukaku, in deadly form as the Reds eased through to a fourth-round trip to Swansea City.

United made nine changes from the side that started against Everton on Sunday but still fielded a strong lineup that underlined Jose Mourinho’s attacking options.

Rashford dinked in United’s opener after four minutes and smashed home his second after a sweet turn in the 17th minute.

Lingard made it 3-0 before halftime with a wickedly-deflected shot and Martial struck on the hour.

Man City, level with United at the top of the Premier League, were involved in the night’s one all-Premier League tie, edging out West Bromwich Albion 2-1 at the Hawthorns.

Leroy Sane gave City a third-minute lead and struck again in the 77th minute shortly after Claudio Yacob had levelled for the home side. West Brom hit the woodwork in stoppage time.

Eden Hazard made his first start of the season for Chelsea after recovering from an ankle injury and played the full 90 minutes in a 5-1 defeat of second-tier Nottingham Forest.

Michy Batshuayi stole the spotlight though with a hat-trick while Kenedy and Charly Musonda were also on target.

Midfielder Jack Wilshere played a full 90 minutes for Arsenal for the first time in three years while Alexis Sanchez started and set up Walcott’s winner.

“I wanted to leave him on to give him 90 minutes and overall I think it was an ideal game for him to gain confidence and fitness,” Arsenal manager Arsene Wenger said.

“That was hard work, credit to Doncaster, they kept going,” Wenger said. “We started well in the first 35 minutes but we decreased slowly.”

‘It’s not over yet,’ Merkel warns supporters before vote

Don’t be fooled by Merkel’s aura of invincibility