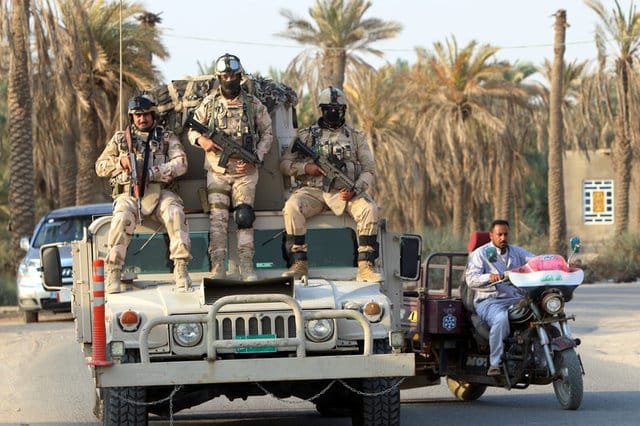 Iraqi soldiers are seen over an army vehicle

Iraq launched an offensive on Thursday to dislodge Islamic State from Hawija, west of the oil city of Kirkuk and one of two areas of the country still under the control of the militants.

The Iraqi Joint Operations Command said the offensive to capture Hawija in northern Iraq “will be swift,” state TV reported.

The action, announced by Prime Minister Haider al-Abadi, took place four days before a referendum on Kurdish independence due to be held in northern Iraq, including Kirkuk.

Abadi says Monday’s referendum is against the constitution and has called on the autonomous Kurdistan Regional Government to cancel it. The United States on Wednesday issued a statement against the independence vote, calling it a distraction in the war on Islamic State.

Kirkuk is shaping up as a flashpoint ahead of the independence vote as it is also home to Arab and Turkmen communities who oppose breaking away from Iraq.

Kurdish Peshmerga forces took control of Kirkuk after the Iraqi army collapsed in the face of Islamic State offensive in 2014, preventing the militants from capturing the oil fields.

The Iraqi forces, deployed north and west of Hawija district, are pushing southward along the Tigris River and had cleared the first lines of defence by midday, state TV said.

A total of 11 villages were captured from Islamic State, said the operation’s commander, Lieutenant General Abdul Ameer Yarallah, cited by the TV channel.

“We finished the first chapter of the liberation operation,” in Hawija, he said, without indicating the timing of the second chapter.

The United Nations last week said up to 85,000 people could be displaced from the Hawija region. Up to 30,000 children are in extreme danger, Save the Children said on Thursday.

“They have already suffered horribly under ISIS rule…food, water and medicine are running out, with many children reportedly weak and malnourished,” the organisation said.

“It is imperative that all Iraqi and coalition forces open up safe escape routes for people and allow civilians to flee to wherever is safest,” it added.

The offensive on Hawija should not affect the Kurdish plan to hold the referendum in Kirkuk on Monday, a Kurdish official told Reuters.

The Peshmerga hold the frontlines with the Hawija district from the eastern side, near Kirkuk, but are not taking part in the offensive, he said.

Hawija, north of Baghdad, and a stretch of land along the Syrian border, west of the Iraqi capital, are the last pieces of the country still in the hands of Islamic State. The group overran about a third of Iraq in 2014.

Islamic State also controls territory in Syria, along the Iraqi border but it is shrinking fast in the face of a US-backed Kurdish-led coalition and Russian and Iranian-backed forces loyal to Syrian President Bashar al-Assad.