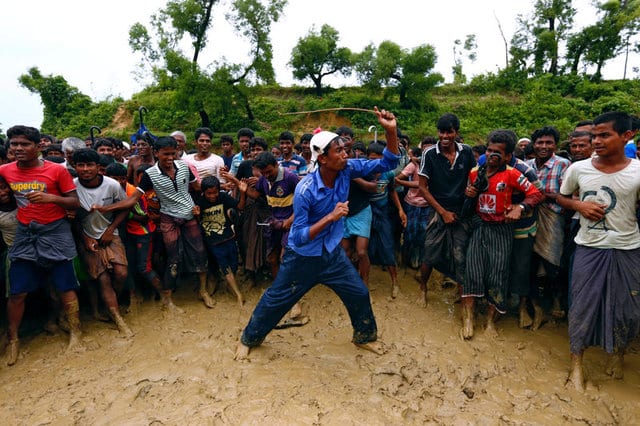 A volunteer tries to control Rohingya refugees as they jostle for aid in Cox's Bazar, Bangladesh

Buddhist protesters in Myanmar threw petrol bombs to try to block a shipment of aid to Muslims in Rakhine state, where the United Nations has accused the military of ethnic cleansing, before police fired in the air to disperse them.

Hundreds of protesters were involved in the attempt to stop Red Cross workers loading a boat with relief supplies.

The incident late on Wednesday reflected rising communal animosity, and came as US President Donald Trump called for a quick end to the violence that has raised concern about Myanmar‘s transition from military rule.

The aid shipment was bound for the north of the Rakhine State where insurgent attacks on Aug 25 sparked a military backlash.

The violence has sent more than 420,000 Rohingya Muslims fleeing to neighbouring Bangladesh but many remain in Myanmar, hiding in fear and without food and other supplies, aid workers say.

Several hundred people tried to stop a boat being loaded with about 50 tonnes of aid at a dock in the Rakhine State capital of Sittwe, a government information office said.

“People thought the aid was only for the Bengalis,” the secretary of the state government, Tin Maung Swe, told Reuters, using a term that Rohingya find offensive.

Protesters, some carrying sticks and metal bars, threw petrol bombs and about 200 police were forced to disperse them by shooting into the air, a witness and the government information office said.

The witness said he saw some injured people. Eight people were detained, the information office said. None of the aid workers were hurt, a spokeswoman for the International Committee of the Red Cross (ICRC) said.

The spokeswoman, Maria Cecilia Goin, said the crowd had approached the boat to ask Red Cross workers what they were doing.

“All emergency support done by the organisation and in the movement is done in a neutral and impartial manner,” she said, citing what the workers had told the crowd before authorities intervened.

Tension between majority Buddhists and Rohingya, most of whom are denied citizenship, has simmered for decades in Rakhine, but it has exploded in violence several times over the past few years, as old enmities surfaced with the end of decades of military rule.

The latest bout of bloodshed began in August when Rohingya insurgents attacked about 30 police posts and an army camp, killing about 12 people.

Myanmar‘s government says more than 400 people, most of them insurgents have been killed since then.

Rights monitors and fleeing Rohingya say the army and Buddhist vigilantes have mounted a campaign aimed at driving out the Muslim population and torching their villages.

Myanmar rejects the charge, saying its forces are tackling insurgents of the Arakan Rohingya Salvation Army who it has accused of setting the fires and attacking civilians.

The crisis has drawn international condemnation and raised questions about the commitment of government leader Aung San Suu Kyi to human rights, and about prospects for Myanmar‘s political and economic development.

Suu Kyi addressed the nation on Tuesday and condemned abuses and said all violators would be punished, adding that she was committed to peace and the rule of law.

However, she did not address UN accusations of ethnic cleansing by the military, which is in charge of security.

Trump wants the UN Security Council to take “strong and swift action” to end the violence, US Vice President Mike Pence said on Wednesday, declaring the conflict a threat to the region and world.

Pence repeated a US call for the military to end the violence and support efforts for a long-term solution for the Rohingya.

US Deputy Assistant Secretary of State Patrick Murphy is in Myanmar and was due to meet government officials and representatives of different communities in Sittwe.

Military chief Senior General Min Aung Hlaing on Wednesday visited an army camp in the state that was attacked on Aug. 25.

“This was a British colony over 100 years ago, we are facing the consequences of their reckless acts until now,” he was quoted as saying in a military release.

This week, Britain suspended a training programme for Myanmar officers because of the violence.

The Myanmar military said five officers in Britain were being brought home and “no trainees … will be sent to Britain any more”.