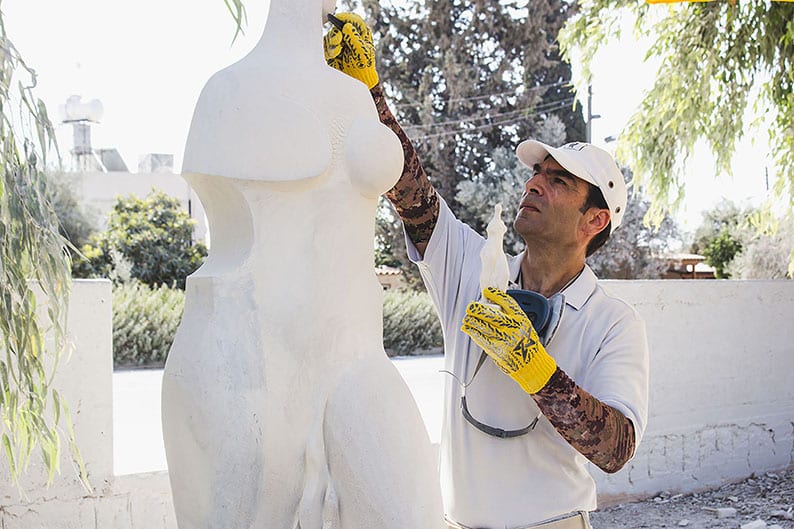 A NEW sculpture park in Geroskipou will be inaugurated by the Cyprus Minister of Education and Culture on Sunday.

The new park will see ten completed sculptures created by different artists from all over the world, and has a theme of ‘Myths and Sculptures,’ and is part of the official ‘Pafos2017’ cultural capital programme.

A spokeswoman for Pafos2017 told the Cyprus Mail: “The artists, started working at the park from the 9th September 2017 and the works will be completed on Sunday 24th, when the inauguration will take place at 7pm by the Minister, Kostas Kadis.”

The ten participating artists from Cyprus and abroad were chosen from an open call for the 1st International Sculpture Symposium and Sculpture Park and the Pafos2017 Organisation received 207 proposals from 29 countries, she said.

The project is curated by Paphos based artist Katerina Foukara, who came up with the proposal for a sculpture park ahead of Paphos’ winning bid for the European cultural capital title. She also has her own studio in Kissonerga, and is well known for her paintings, drawings and sculpture.

She explained that the decision was made to use local Cypriot stone, sourced from a quarry close to Limassol as a way to connect the past with the present.

“This is a way to bring the sculpture closer to history, as many of the antiquities used this stone,” she said.

She added that that the stone is like a limestone, but is quite hard and not smooth, and unlike granite and other materials often used.

Pafos2017 spokeswoman said that entrance to the park is free, adding that: “The sculpture park connects the artistic objectives of a European Capital of Culture with a substantial intervention in the urban landscape, creating the ideal conditions for dialogue between people and the arts, and also the environment.”

She added that such projects prove that the European Capital of Culture creates the conditions and framework which allow for sustainable projects and provides a way for artists to contribute to the aim to develope conscience and change mentality.

Foukara said that a variety of projects had won final approval, some realistic, some abstract and using different techniques.

“The artists come from various backgrounds and are well- known in their home countries, they have been staying in Geroskipou for the last fifteen days,” she added.

The curator said that this is the first time that she has organised such a large, International project and that in line with the idea of a symposium, the artists have been spending time together, exchanging ideas and discussing views.

The sculptors have been fascinating visitors to the park with their work in recent days, as they have been able to watch cubes of stone being transformed into stunning works of art and watch the different techniques involved.

“It has been particularly interesting and informative for the schools which have visited, as the onus these days is on technology, video and so on. This is a more organic approach,” she said.

She added that the mayor of Geroskipou, Michalis Pavlides, who is currently abroad, has been fully supportive of the venture and aims to make the sculpture symposium an annual event which will add further beautiful sculptures to the park every year, she said.

Half of the sculptures were installed on Thursday, the rest will be put in place on Friday, ahead of the official opening.

The new park is found close to the central square of Geroskipou and was previously an unused open space.

“This new park is an outdoor museum and is a way, through art, to join the different cultures,” she said.