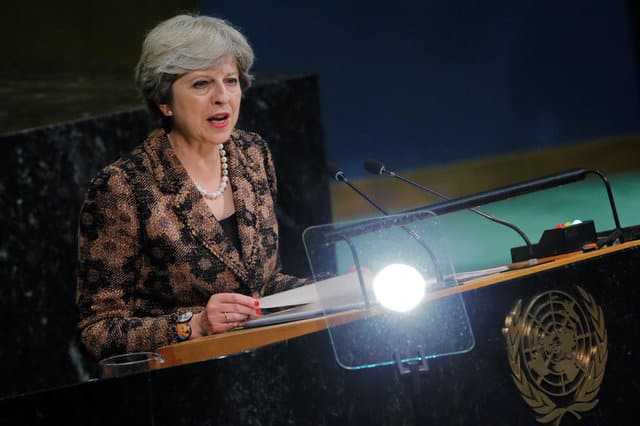 British Prime Minister Theresa May will to try to break the deadlock over one of the most symbolically important questions: how much it will cost Britain, in hard cash, to end its EU membership?

British Prime Minister Theresa May will try to rescue stalled Brexit talks on Friday with a speech in the Italian city of Florence she hopes will convince the European Union she is ready to cut a fair divorce deal.

Europe’s capitals and boardrooms will be watching to see if May can offer enough to EU negotiators to persuade them to move talks forward, without angering eurosceptics in Britain who have the power to destabilise her minority government.

Britain is scheduled to leave the EU in March 2019 after a shock referendum result that has triggered more than a year of political turmoil, set business leaders on edge and sent sterling plunging.

The most complex set of European negotiations since the end of World War Two have pitted London against Brussels over how to unravel more than 40 years’ economic and political integration.

After three rancorous months of negotiations, May, leader of the world’s fifth largest economy, will to try to break the deadlock over one of the most symbolically important questions: how much it will cost Britain, in hard cash, to end its EU membership?

“The UK’s departure from the EU is inevitably a difficult process, it is in all of our interests for our negotiations to succeed,” May will say, according to advance extracts of her speech.

“The eyes of the world are on us but if we can be imaginative and creative about the way we establish this new relationship … I believe we can be optimistic about the future we can build for the United Kingdom and for the European Union.”

Britain has expressed frustration at the EU’s demand for progress on the exit bill it must pay – if not an exact amount – before talks can move on, with British ministers keen to start negotiating the terms of its new relationship with the bloc.

Brussels has recoiled at Britain’s approach, criticising a lack of detail and policy direction.

The BBC reported that May would say Britain is willing to pay 20 billion euros ($24 billion) to the EU during a post-Brexit transition period, but only if it has access to the bloc’s single market.

May’s office said she would detail her plan for a “time-limited implementation period” – something the government has previously said it thinks is needed to ease business concerns about the exit – but gave no further details.

The EU’s chief negotiator said May needed to make a firm offer on key issues, including the Brexit bill, before the start of the next round of negotiations next week.

“To make progress, we are waiting for clear commitments from the UK on these precise issues,” Michel Barnier said, noting demands for EU citizens in Britain to have their rights there protected by EU courts, and for London to pay a hefty bill before leaving.

May’s speech comes at the start of a crucial week for Europe.

On Sunday, German voters are expected to return conservative Chancellor Angela Merkel to power but also vault eurosceptic parties into parliament, including the Alternative for Germany (AfD) whose nationalist, anti-immigrant ideas echo those of Britain’s UKIP party, a driving force behind Brexit.

Two days later, French President Emmanuel Macron is expected to flesh out his ideas for a “relaunch” of the EU and euro zone, underscoring the bloc’s determination to press ahead with a closer union that excludes the UK.

May’s leadership has been hamstrung by the June general election she called to win a mandate for her Brexit strategy but which went badly wrong, costing her party its parliamentary majority and spawning a new debate about how to quit the bloc.

On Thursday, May gave her ministers a sneak preview of the speech in her London office, hoping to head off conflict among them.

“The speech will probably not be a slam dunk or game changer,” said Matthew O’Toole, a former aide in May’s office who left his position before the speech had been drafted.

“She is more constrained by domestic political concerns – as the past week has shown – than she would have liked.”

Those present at Thursday’s preview included foreign minister Boris Johnson, one of Britain’s most high-profile pro-Brexit politicians and a one-time leadership contender.

Johnson’s intervention and reports of a row with May caused sterling to seesaw as traders fretted that he might resign, toppling her minority government and casting Brexit into chaos.

“The view among hardcore Brexiteers in parliament … is that somehow we’ve allowed Brexit to go sour,” said a Conservative Party source who asked not to be named.

“The pressure is on her now to show some semblance of authority and show she is driving this and she’s going to have to try to show that she shares the Boris upbeat vision of Brexit.”

A wealth of local products and services