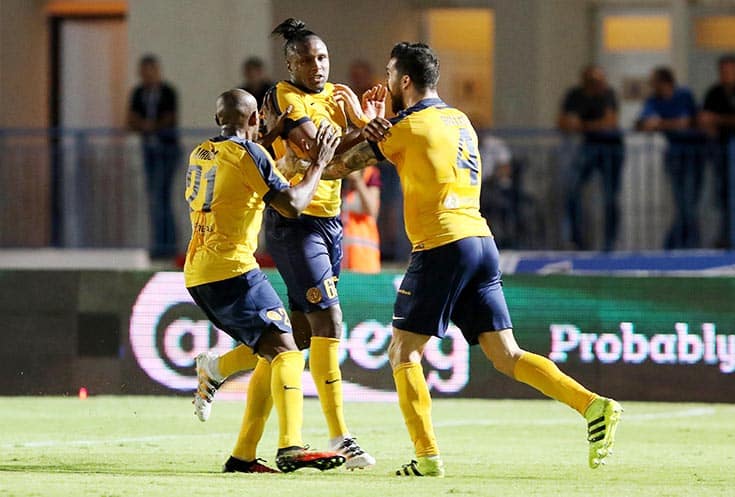 The Limassol derby between AEL and Apollon is the highlight for the fifth round of the Football Championship, while another fixture that will attract attention is the Nea Salamina and AEK clash.

Limassol will be a divided city come Saturday night as its two big teams AEL and Apollon will meet for the first time this season, just a day earlier from the corresponding fixture last year when AEL came back from behind to win 2-1.

A lot of players have come and gone from both sides since, while the season has not begun particularly well for either side with them dropping points and failing to impress in their displays.

Dossa Junior and Marco Soares, both doubtful for Saturdays game, were included in the squad by their coach Bruno Baltazar and at least one should feature in the starting line-up.

However, Baltazar’s big problem is in the final third of the field where AEL have rarely looked menacing in their games so far, managing just a couple of goals.

Their main striker Arraubarrena is going through a lean spell and Baltazar may opt for the youngster Marios Elia to add a bit of speed up front with the likes of Mezga, Fidelis and Aldair knocking on the door for a first team start.

After failing to beat Olympiacos in their first game of the season Apollon were spared further embarrassment when they managed two goals in added time to defeat pointless Ermis Aradippou last week.

Apollon coach Sofronis Avgousti will watch the game from the stands as he was sent off during the Ermis game and his assistant Pericles Papanayi will take his place on the sidelines.

Scoring has not been a problem for Apollon but it was evident from their last game that they need to shore up their defence especially against teams that like to counter on the break.

Nea Salamina began the season with high hopes but their form so far has failed to live up to the expectations and against second place AEK they will need to be at their very best if they are to get anything out of this game.

AEK, still reeling from their heavy 5-2 midweek defeat to Omonia, will want to bounce back but they will likely have to do it without their two main strikers, Ivan Triscovski and Florian Taulemmese, who are in race against time to be fit for the game.

Omonia entertain first division newcomers Alki at the GSP stadium and any other result than a home win will be considered a failure by their fanatical supporters.

Pambos Christodoulou’s side were impressive against AEK but it will be a totally different story against a team that defends in numbers and is lightning quick on the break.

Olympiacos, a pleasant surprise so far, takes on Pafos FC while Ermis Aradippou are at home to Ethnikos Achnas, two games that can both be considered as six-pointers.

On Monday evening leaders Anorthosis face third placed Doxa with the home side favourites for the three points.

In the opening game of the round that was played last night champions Apoel were held to a goalless draw against Aris in Limassol.

Sunday: Olympiakos vs Pafos FC,  Ermis Aradippou vs Ethnikos Achnas (both at 6.00)