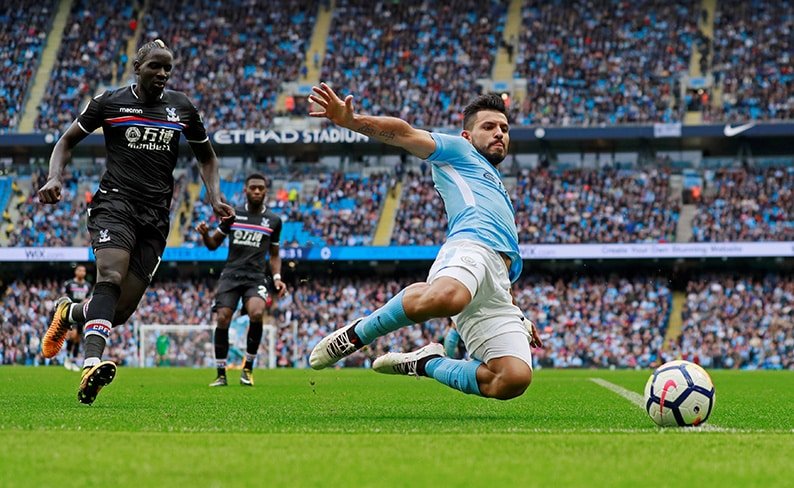 Manchester City ran riot in the second half at the Etihad to thrash Crystal Palace 5-0 in the Premier League on Saturday, while Manchester United made hard work of their 1-0 win at Southampton.

City were second best for much of the first half but Leroy Sane’s goal just before halftime gave them the momentum to go on to rout Palace who became the first side in English Football League history to lose their opening six games of the season without scoring.

United were far less convincing in their success at Southampton but Romelu Lukaku’s first-half goal was enough to ensure they stay level on points with leaders City. Referee Craig Pawson’s decision to send manager Jose Mourinho to the stands late on put a dampener on the result at St Mary’s.

The Portuguese declined to be drawn on the incident but was full of praise for his side’s defensive efforts.

“We fought hard,” Mourinho said. “We did for 20, 25 minutes what many teams do for 90 minutes which is to play with five at the back. So many teams are always defensive.

“That being said, we had two incredible chances to kill the game. Our attacking players were not sharp.”

One striker very much on form was Alvaro Morata, whose hat-trick helped Chelsea to keep pace with the Manchester clubs. Antonio Conte’s men remain three points behind in third after their 4-0 win at Stoke.

Tottenham climbed into the top four after a thrilling 3-2 win at London Stadium over West Ham.

Two goals from Harry Kane and one from Christian Eriksen helped Spurs to ease into a 3-0 lead but goals from Javier Hernandez and Cheikhou Kouyate ensured that the visitors, who had Serge Aurier sent off with 20 minutes to go, were hanging on at the death.

In Manchester, Sane’s brilliant goal for City seemed somewhat undeserved but Palace struggled to cope with their slick football in the second half.

Raheem Sterling helped himself to a quick-fire goal after the break, before Sergio Aguero got a goal 11 minutes from time.

Fabian Delph’s late stunner ensured City became the first side to score five or more goals in three consecutive top-flight games in the same season since Blackburn in 1958-59.

While manager Pep Guardiola was pleased with City’s second-half showing, he admitted to being concerned about their sluggish start.

“We started well, in the first five or ten minutes, but after that we were not good,” Guardiola said. “We did not move the ball well but in the second half we were at our level; we regained our tempo.

“Eight players did not play in midweek and when you change for different competitions you are not as sharp as when you play every three days.

Wayne Rooney went off with a bloody eye injury after a clash with a defender as Everton hosted Bournemouth and his replacement Oumar Niasse decided the match, netting a double to earn a 2-1 win after Josh King had given the visitors the lead.

In south Wales, Richarlison scored a last-gasp winner to earn Watford a 2-1 victory over Swansea — the Hornets’ third away success in a row.