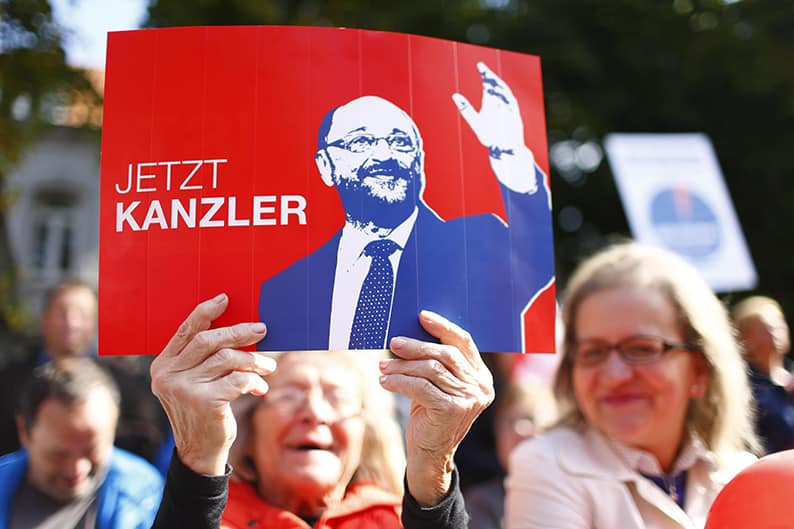 GERMAN Chancellor Angela Merkel, poised to win a fourth term in Sunday’s election, urged supporters on Saturday to keep fighting for votes with a third of the electorate still undecided.

Merkel’s call was echoed by her centre-left challenger Martin Schulz of the Social Democrats, now in an unwieldy “grand coalition” with her conservatives.

Merkel is widely expected to cruise to re-election with the Social Democrats trailing by double digits but the far-right Alternative for Germany (AfD) could emerge as the third largest party, complicating the make-up of her next coalition.

A new INSA poll published by Bild newspaper showed declining support for both Merkel’s conservatives, who dropped two percentage points to 34 percent, and the SPD, down one point to 21 percent.

The anti-immigrant AfD, meanwhile, gained two percentage points to 13 percent, which would make it the first far-right party to enter parliament since the end of World War Two.

Merkel, speaking to supporters in Berlin before heading to her home constituency in northern Germany, called for a final push to drum up votes by focusing on conservatives’ commitment to support for families, a pledge to avoid tax increases and a focus on increasing security in Germany.

The Christian Democratic leader also lauded the role of the European Union in providing stability in “a troubled world”.

“We want to boost your motivation so that we can still reach many, many people today. Many are still undecided,” said Merkel, who then walked the pedestrian zone in the northern city of Stralsund and led a crowd in practicing CPR in Greifswald.

Merkel said it was important to focus on social justice issues but also to show how conservatives had ensured the strength of Europe’s largest and richest economy.

First elected in 2005, Merkel remains popular in Germany but has regularly faced jeers and whistles from left- and right-wing demonstrators during her speeches across Germany – a decided change from her last campaign in 2013.

At a campaign rally in Munich on Friday, Merkel defended her 2015 decision to admit about one million asylum seekers as a humanitarian necessity but pledged to prevent a repeat of that crisis by doing more to fund programmes in migrants’ home countries to dissuade people from emigrating.

“What happened in 2015 cannot and will not be repeated,” Merkel said, saying she would protect European borders.

But he also criticised the AfD as “a wolf in sheep’s clothing” and said the BfV domestic intelligence agency was studying “whether right-wing extremists are seizing power and exerting influence on the party”.

In Berlin on Friday evening, Schulz urged supporters to keep knocking on doors in pursuit of a higher voter turnout, saying this could offset growing support for the AfD. He described the AfD as “gravediggers of democracy.”

Schulz told Bild newspaper he had not given up hope of victory since 37 percent of voters remained undecided.

The AfD was founded in 2013 with the original goal of opposing large bailouts of financially strapped euro zone countries but from 2015 shifted its focus to immigration.

The party, which has already won seats in 13 of 16 state legislatures in Germany, has promised to re-energise debate in the federal parliament after four years of what it calls “boring” rule by Merkel’s grand coalition.

Electoral arithmetic might yet push Merkel to renew her coalition with the SPD, or she might opt for a three-way alliance with the pro-business Free Democrats (FDP) and environmental Greens.

The Institute for Electoral, Social and Method Research think tank said on Saturday a simulation of the vote indicated “a drastic shift from left to right”, with left-leaning parties at their weakest point since the 1960s.

The net winners in Sunday’s election, it said, would clearly be the AfD, which it expects will take 13.7 percent of the vote.

It forecast that the conservatives would win 34.8 percent and the SPD 22.1 percent – both sharply less than in 2013.