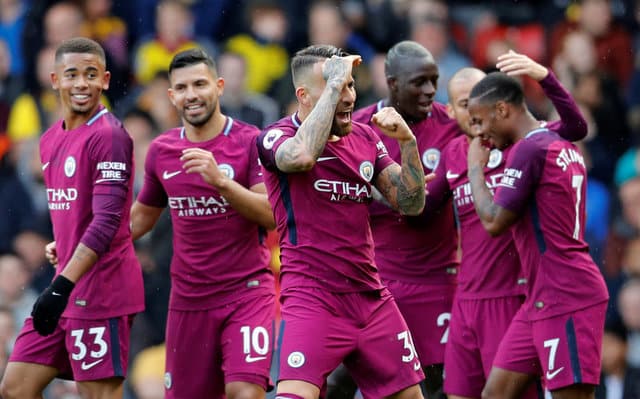 The side that cannot stop scoring goals hosts one that has forgotten what it feels like to see the net bulge when leaders Manchester City face rock bottom Crystal Palace in the Premier League on Saturday.

Pep Guardiola’s City slickers look like the real deal this season and 11 of the 16 league goals they have scored in five Premier League matches arrived in their last two games, either side of a Champions League thrashing of Feyenoord.

A 5-0 romp against supposed title rivals Liverpool was followed by a 6-0 hammering of Watford and quite what City will do to a Palace side without any points or goals is a worrying thought for followers of the south London strugglers.

Especially considering the fact that the two previous clashes between the sides this year finished 3-0 and 5-0 to City.

Palace did claim a morale-boosting 1-0 victory over Huddersfield Town in the third round of the League Cup on Tuesday but with Manchester United and Chelsea looming after City there is the real prospect of eight successive defeats.

Former England boss Roy Hodgson, who took over from Frank de Boer last week, spoke of a light at the end of the tunnel on Tuesday. An away trip to the Etihad Stadium has probably arrived too early in his reign for Palace to emerge from the gloom.

City‘s early-season pace has been matched by Jose Mourinho’s Manchester United who joined them at the top with a 4-0 win over misfiring Everton last weekend — a result which means the two Manchester clubs have identical records.

United travel to ninth-placed Southampton on Saturday with striker Romelu Lukaku needing one goal to equal Louis Saha’s record for the most goals scored after six Premier League appearances for United (six).

The weekend action kicks off with a feisty-looking London derby between West Ham United and Tottenham Hotspur — a fixture that last season effectively ended the title race with West Ham beating their high-flying rivals 1-0.

Fifth-placed Tottenham will be eager to erase the memory of that bitter disappointment and will probably be happy to be playing away after three league games without a victory at their temporary Wembley Stadium home.

Champions Chelsea, in third place, travel to a Stoke City while faltering Liverpool have an immediate chance to avenge their midweek League Cup exit at the hands of Leicester City as they go to the King Power Stadium again.

The vultures are circling above Everton manager Ronald Koeman as his third-from-bottom side host Bournemouth.

Everton snapped a four-match losing streak in all competitions, in which they scored none and conceded 12, by beating Sunderland 3-0 in the League Cup.

Surprise packages Burnley and Huddersfield clash at Turf Moor in the first top-flight fixture between the clubs since 1971. Newly-promoted Huddersfield are sixth, one place above a Burnley side who have beaten Chelsea and drawn with Tottenham and Liverpool so far.

Sunday’s fixture sees Brighton and Hove Albion manager Chris Hughton up against his former club Newcastle United while Arsenal, with ground to make up after a mediocre start to their campaign, host West Bromwich Albion on Monday.

AEL and Apollon face off in Limassol derby