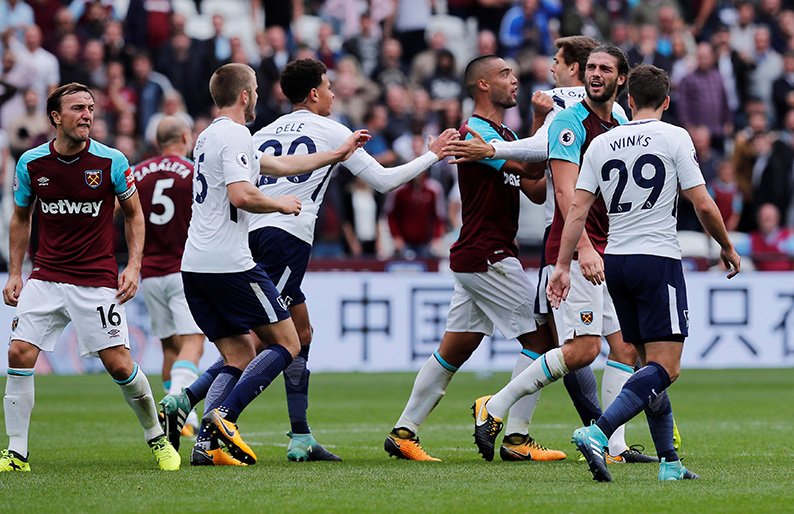 Tottenham Hotspur secured a 3-2 victory at West Ham United on Saturday, having survived a late comeback from their London rivals and played the last 20 minutes with 10 men.

The result never appeared in doubt as Spurs dominated early on and the pressure told as Harry Kane headed the visitors into a 34th-minute lead, before making it seven goals in six games against West Ham four minutes later.

Christian Eriksen expertly converted from the edge of the box to make it 3-0 on the hour mark, before West Ham’s Javier Hernandez tapped home five minutes later to give the home fans hope.

Serge Aurier was then dismissed for a second booking, before Cheikhou Kouyate ensured a nervy finish for Spurs after netting with three minutes to go.

Spurs held on, however, for a fifth successive away win – equalling a club record for victories on the road – a success that piles the pressure on West Ham boss Slaven Bilic.

The hosts’ flow was disrupted early on as Michail Antonio was forced off with an injury and replaced by Andy Carroll, but not long after the burly striker’s introduction, Spurs’ talisman Kane stepped up to break the deadlock.

Eriksen released Dele Alli down the right, the England international then clipped a cross into Kane’s path, leaving him with the simple task of steering his header home from close range.

He doubled the lead four minutes later as Joe Hart’s goal kick came straight back and Jan Vertonghen fed Alli, whose toe-poked effort was saved, but Kane was on hand to slide the ball into the empty net.

“He’s a great striker,” Tottenham boss Mauricio Pochettino said after the match. “I am in love with him. You can feel that.”

After the break, Tottenham continued to control proceedings, and it was not long before Eriksen made it three.

Kane’s free kick had come off the post, and as the hosts regrouped, Aurier’s cross landed at the feet of Eriksen, who swept the ball home from the edge of the box on the half volley.

Hernandez then gave his side a lifeline, reacting quickest to Jose Fonte’s flick-on from a corner to tap in, before Aurier’s needless foul on Carroll saw him dismissed.

That galvanised the hosts, with Kouyate heading home Arthur Masuaku’s cross with three minutes to go, but an equaliser failed to materialise and Spurs held on.

Dasoudi Park in Paphos in urgent need of clean up