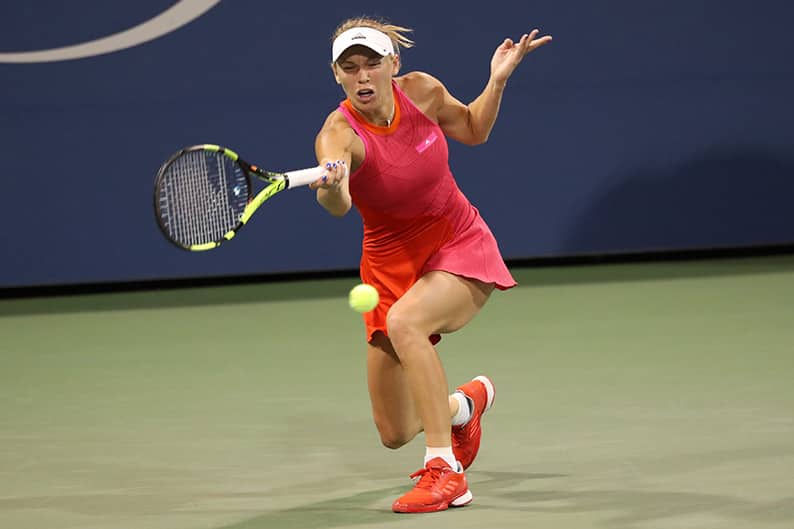 DEFENDING champion Caroline Wozniacki crushed new world number one Garbine Muguruza 6-2 6-0 on Saturday to advance to the final of the Pan Pacific Open as the Dane remained on course for a third title at the Tokyo tournament.

The third seed rallied from a set down to win her previous two matches but the 27-year-old wasted no time seizing control of her semi-final against Wimbledon champion Muguruza.

The Dane broke the top seeded Spaniard’s opening service game and repeated the feat twice more to cruise through the first set.

A stunned Muguruza, who had not lost a set in the previous rounds, was unable to gain any momentum and was shut out for the remainder of a match that was wrapped up in exactly one hour.

“I thought I played a good match today and stayed aggressive and served well,” Wozniacki told reporters, noting that playing tough opponents in her previous matches had helped toughen her up.

“They played very aggressive and went for their chance. So it was very difficult and today I just managed to start strong,” added Wozniacki, who will contest her seventh final of the season after losing her previous six.

Muguruza, who was chasing her first title since being crowned world number one this month, said she was “very disappointed” but would not dwell on the loss and instead focus on upcoming tournaments.

“Today maybe my best tennis wasn’t there. She played good and I’m not going to think a lot about this,” the 23-year-old said.

The match appeared headed for a blowout after 26-year-old Pavlyuchenkova, seeking her third title this year, took the first eight games against the former world number one.

However, Kerber dug in and broke Pavlyuchenkova’s serve in the third game of the second set before the 29-year-old German forced a tiebreaker and stole the second set.

A rattled Pavlyuchenkova dropped the first three games of the final set but regained her composure to win six of the final seven and notch the victory.

“It was really a tough match today, another three setter,” Pavlyuchenkova said. “Angelique is a former number one so you never expect an easy match with her. She’s such a great fighter.”

Kerber said she struggled to find her feet at the start of the match.

“In the first set I was completely not in my rhythm, not in my game, and she started very well,” she said. “I tried to turn it around and I won the second set. So in the end, it was still a good match.”

Wozniacki leads Pavlyuchenkova 5-1 in their head-to-head meetings, although the pair have not faced each other since 2012.

Man dies in the sea off Paphos