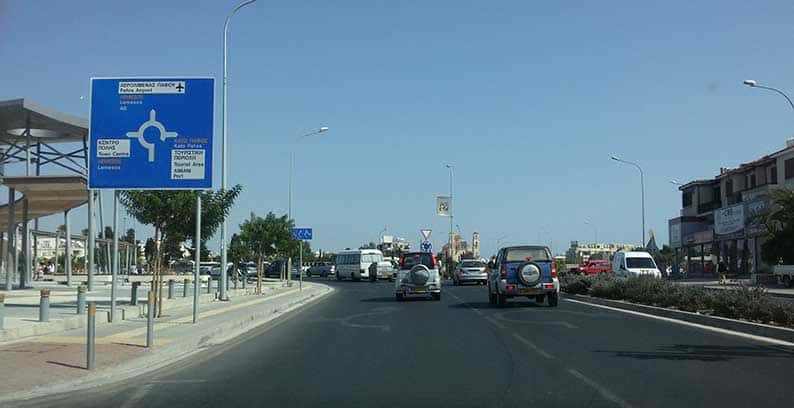 Roadworks are the one thing businesses fear most. Months and months of dust, disruption, blocked access and the inevitable delays put off customers and pose a huge threat to livelihoods.

Paphos has had more than its fair share of disruptive roadworks in recent years, all of them made worse by long delays, and nowhere more so than the Tomb of the Kings Road area of the town.

The long-term benefits of the improvements can be hard to imagine when an owner of a restaurant sees their business plummet. Some businesses along this busy road in one of the town’s main tourist areas with its large number of hotels, tourist accommodation, restaurants and bars were forced to close.

Extended delays to the roadworks passed numerous deadlines. Work should have been completed in April 2015, but contractors were granted an extension to January 2016. This was then extended until April 2016, then June and July.

But for the businesses that did survive the general opinion is that since work was finally finished last summer, the new-look road has benefited the area.

Michael Michael, who owns and operates two business, opposed the creation of the four-lane road, but said that now completed, it has tidied up the area though a number of important, albeit ‘small’ improvements still need to be made to the busy thoroughfare.

“It needs to be made viable and safe for people. It’s a busy tourist area and I have witnessed at least six accidents myself,” he said.

One of these involved a British tourist being knocked down as she attempted to cross the road, she remains in a coma, he said.

The new dual carriageway will eventually form part of a ring road around the town, and includes a central reservation, walkways, cycle paths and a series of roundabouts.

But Michael believes that plans for the road were decades old and outdated, as they were drawn up in 1997 and this has led to a number of problems for those using it.

Towards the end of the road nearest to the popular shopping mall, traffic lights and crossings have been placed too close together and do not allow vehicles enough time to stop safely.

“This is a busy road and cars travel more quickly now. There needs to be a warning that these things are ahead, so it’s not always the fault of the driver,” he added.

Michael said that when a project is finally completed it’s viewed in a different way and the new look road makes an aesthetic difference, as it was previously a mess and ‘chaos’. However, he said that pavements should be wider, trees should be planted to provide shade and that there is a cycle lane that literally stops.

“What are cyclists expected to do, carry their bicycles on their shoulder?”

The lack of disabled parking spaces is another issue and instead of the 200 or so on-site parking for businesses as promised, there are only around 45. This means that in some places, delivery trucks have to park in the middle of the road.

Christina Demitriou, owner of popular Gustoso restaurant, owns one of the businesses that survived but was badly affected by the roadworks.

The venue, which opened six and a half years ago, serves international cuisine has an outdoor area which looks onto the road and is usually busy, but what with the dust, trucks and other machinery, many people, understandably, didn’t want to use this space.

The works directly outside the restaurant lasted over six months.

“Our income was down by at least 30 per cent, we lost a lot of money through wastage, as it was hard to gauge numbers of guests and we had to let two waiting staff go,” she said.

Demitriou was not opposed to upgrading the road and said that work needed to be done, but she questioned the timing and length of the roadworks, which forced a number of other businesses along the road to close down.

“The road is much better since the works have been completed, they did a good job,” she said.

And so far, it’s been a good year for the restaurateur with business up by around 20 per cent on usual figures.

Holidaymakers, Gareth and Linda Walker who regularly stay at hotel accommodation in the area have greeted the end of roadworks with relief.

“We come a few times a year and it has been horrific. The dust, dirt and lack of proper safety measures were all a concern and were very off-putting. However, it looks much better now,” Gareth said.

His wife, however, believes the road has lost some of its charm.

“I’m not a fan of dual carriageways generally and I think if they had made the road a little wider where possible, tidied it up, put in lights, pull-ins for cars and added bus shelters, as well as some flowers, greenery and shrubs, that was all that was really needed,” she said.

Matthew Edmondson, owner of escape rooms, ‘Lockdown Paphos’, agreed that although the works were disruptive, messy and dirty, it was all worth it.

“Anything which renovates Paphos and brings it up to date is good.”

As much of his custom comes from online booking and only around 20 per cent from walk-ins, he was one of the lucky ones as his business didn’t really suffer.

“It was a nuisance as there were barriers outside our frontage for around eight months, but our customers knew what was going on, so they were understanding,” he said.