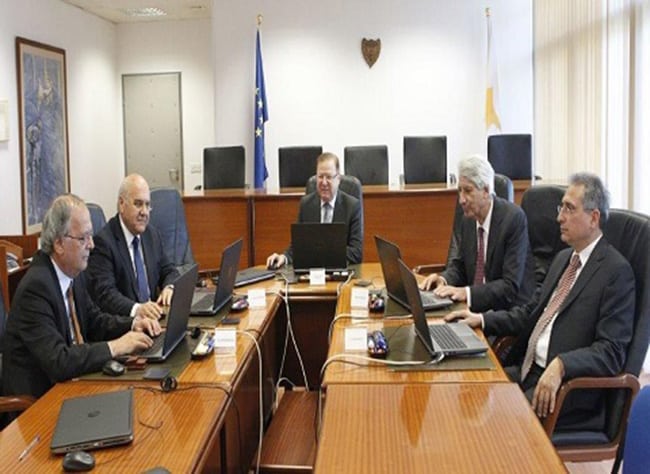 IT COULD only happen in Cyprus. Speaking at the House institutions committee, justice minister Ionas Nicolaou said legislation was being prepared, obliging public bodies to comply with court decisions. Are there many countries in which a law is needed to make public bodies respect court decisions? What is even more surreal is that this law exclusively targets the public sector including government departments. In other words, the government is passing a law to make its department heads and ministers respect the law. Why is the contempt of court law, which has seen many people end up in prison, not applied?

The court decisions ignored, relate to appeals filed by public employees against promotion, appointment and dismissal decisions. For instance, an employee that failed to secure promotion appeals claiming the person that was promoted was ineligible because he or she did not have the required qualifications or that the incorrect procedure was followed. In mitigation, for ignoring decisions, a government department could argue that the time needed for the court to rule in such cases could be three or four years, in which time it is impractical to remove the promoted person from the position and replace him or her by the employee that should have been promoted in the first place.

An illustration of how messed up the system is, was provided a few months ago when, after several appeals and counter-appeals, the court made a final ruling on a case dating back to 2007. The case involved four positions for officer ‘A’ at the finance ministry and one of the applicants overlooked went to court claiming a successful candidate did not have the qualifications stipulated by the employer. These were internal appointments/promotions, for which ministry employees applied. After 10 years, the appointment was finally quashed, which meant the occupant of the post, who had received several more promotions in the meantime, had to return to the pre appointment/promotion position and take a big pay-cut in the process as well. The money paid in those 10 years, however, did not have to be returned because the employee could not be penalised for the mistake of the authorities.

A case, cited by the auditor-general at the above-mentioned committee meeting, highlighted how irresponsible some public officials were with the taxpayer’s money. A court had ruled that the secretary of the Paliometocho community council had been wrongfully dismissed by the council and had to be given his job back. However, the community leader did not want the secretary back at the council so placed him on paid leave from 2008, when the court issued its ruling to 2015!

To tackle such problems the new legislation stipulates that the administrative body that does not comply with a court decision, would be obliged to pay a daily fine until it complied. The cost of the fine would be deducted from the administrative body’s budget; in other words, the taxpayer would pay the fine. In cases in which non-compliance could be blamed on individuals, action would be taken against them and they would have to pay the fine. Why would the punishment of an individual who shows contempt for a court decision be restricted to a fine? Why does the law not stipulate imprisonment, even though we doubt any individual would ever be prosecuted.

Public administration is a dysfunctional mess and the political parties, which all now support the government law proposal, have the biggest share of the responsibility. The parties, through the traditional system of patronage, sanction suspect promotions and appointments that the courts overturn. The Public Service Commission (PSC) that has the final say on appointments and promotions is made up of party appointees that ensure an equitable distribution of positions among party members. Why does the new law not stipulate the fining of well-paid PSC members that have the final say on promotions after examining all paperwork?

Meanwhile, no government has ever put in place a reliable staff evaluation system in the public sector, almost 99 per cent of staff receiving the top mark of ‘exceptional’, because it easier for nepotism to be practised when everyone’s job performance is the same – excellent. The dysfunctional justice system makes matters worse by taking years to issue a decision. There are many government departments run by acting managers for years, because of litigation that prevents a promotion being finalised. The uncertainty destroys staff morale as does a system that allows one worker to challenge the promotion of a colleague.

It is very foolish to believe this monumentally dysfunctional system could ever be tackled through more legislation, which would mean more court cases and more delays. The new law will change nothing. It is nepotism, the root cause of the problem, that must be tackled, by keeping party people off the PSC and a reliable, staff evaluation system being introduced. But our parties would rather pass new laws that will never be enforced than tackle the problem.

Tales from the Coffeeshop: ‘The Viagra effect’ on a slow news day.

Audit boss in the crosshairs