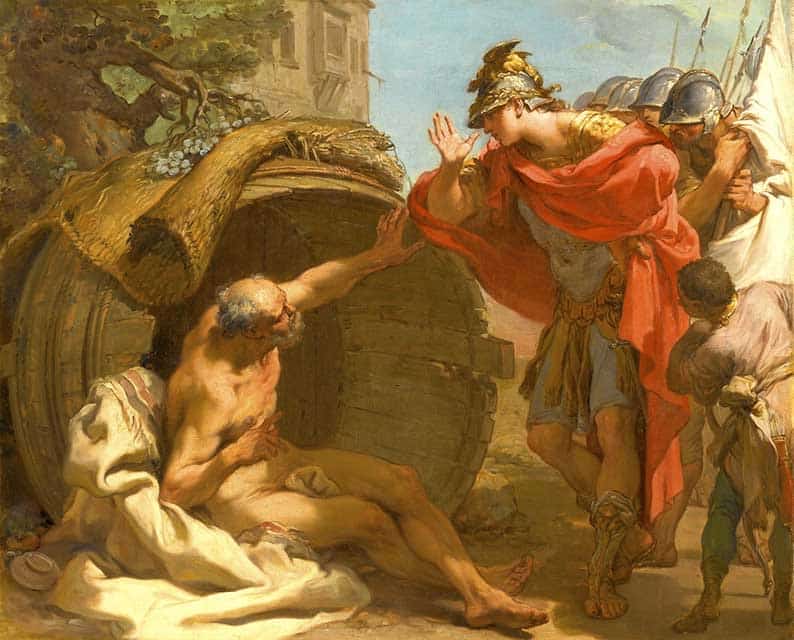 The encounter between Alexander the Great and curmudgeonly Diogenes

Until my old philosopher friend Dr Edward Spence suggested I write about being cosmopolitan, the only link between Cyprus and the word cosmopolitan was a nightclub in Nicosia I used to frequent in the late 60s when I used to go clubbing. If memory serves it was an old-style detached family home that had been converted into a club complete with dance floor and live music that included a singer.

The world of cosmopolitan nightclubs is far removed from the world inhabited by Diogenes the Cynic who coined the word cosmopolitan. He hated the material world and was very wise and witty and a bit curmudgeonly. When asked where he hailed from, he said ‘I am a cosmopolitan’ which means citizen of the world – from the Greek kosmopolitis.

Diogenes lived in morally bankrupt times similar to ours and was frequently seen in the streets with a torch, telling anyone who asked why on earth he was going around carrying such a thing in broad daylight that he was searching for an honest man. In our times the torchlit quest for honest men is not confined to Cyprus – the scarcity of intellectual as well as financial honesty is worldwide.

The best known Diogenes story is the one when he was sunning himself outside a barrel that was his home when Alexander the Great came to visit, stood in front of Diogenes and offered to fulfil any wish the old the curmudgeon would care to name. Whereupon Diogenes mocked the great man by saying that the only wish he would ask was for Alexander to move a little as he was blocking the sun.

Less well known is Alexander’s reaction to being mocked. He turned to his entourage and said ‘if I were not Alexander I should like to be Diogenes.’ Pride and modesty in equal measure, as befitted the emperor student of Aristotle – everything in moderation or pan metron ariston if you prefer

My late mother’s favourite Diogenes story had a culinary dimension. To tease Diogenes, who had been boasting that he liked to live like a dog, Alexander sent him some takeaway bones as a gift for his birthday. Upon receiving the bones Diogenes said, sarcastically, that the meal did indeed befit a dog but the gift did not befit a king.

Queen Elizabeth’s favourite gift to other heads of state is a bottle of smooth malt Scotch whiskey which not even Diogenes would knock.

If Diogenes was a world citizen Alexander was an emperor with an empire and citizens across many lands, peoples and cultures. His empire was followed by the Roman Empire and Byzantium. There then followed the Arab and Ottoman Empires and the French and British had them too. All produced a cosmopolitan class of citizens that often thrives in diverse cultures.

In Cyprus the church was very cosmopolitan and kept its position of privilege literally by ‘rendering to Caesar what was Caesar’s.’ The archbishop was made head of his community – an ethnarch – that enabled him to assist with the collection of taxes.

In the history of moral and political ideas cosmopolitanism was given intellectual force in the 18th century by Enlightenment philosophers who propounded the fundamental principle that what is morally right is not decided by religion or feeling or by government, but by the application of reason universally in every case. In other words, what is morally right can only be so if it is universally right.

These ideas led directly to the UN Declaration of Human Rights and the European Convention of Human Rights and other human rights documents. The use of the word human rather than cosmopolitan is fortuitous. The rights enshrined there are universal which human beings have as of right as citizens of the world – the Nazis were entitled to a fair trial because of the principle of universality just as they were entitled not to be tortured despite their appalling crimes.

With technological advances in communications at the current rate, the force of destiny is on the side of cosmopolitanism: this time as a result of science and technology rather than conquest or philosophical deliberation.

Other things being equal in a hundred years we shall all become cosmopolitans. So although it is true that in the long term we shall all be dead, it is also true that in the long term those that will follow us will be cosmopolitans. This needs to be factored into how problems of today are addressed. It is for example interesting that space travellers are called cosmonauts in Russian rather than astronauts, but that is another story.

At the moment citizens need the institutions of states or international institutions such as the UN and the Council of Europe to protect universal rights, but the crucial point is that people have these rights by virtue of being citizens of the world because of the universality of fundamental rights. How to protect rights in a cosmopolitan world rather than their existence is the question.

In the long term the problems associated with the Cyprus problem of today are just teething problems of a cosmopolitan microcosm that is inevitable.

The man who saved the world

The inexact definitions of poverty are open to political abuse