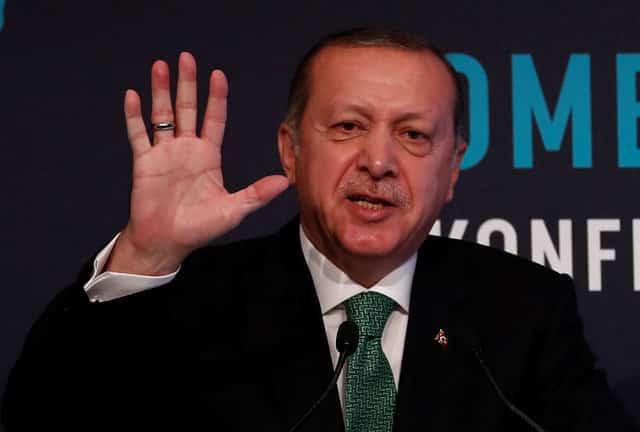 Turkish President Erdogan makes a speech during a conference in Istanbul

President Tayyip Erdogan warned on Monday Turkey could cut off the pipeline that carries oil from northern Iraq to the outside world, intensifying pressure on the Kurdish autonomous region over its independence referendum.

Erdogan spoke shortly after Prime Minister Binali Yildirim said Ankara could take punitive measures involving borders and air space against the Kurdistan Regional Government (KRG) over the referendum and would not recognise the outcome.

Voting began on Monday despite strong opposition from Iraq’s central government and neighbouring Turkey and Iran – both with significant Kurdish populations – as well as Western warnings the move could aggravate Middle East instability.

Erdogan, grappling with a long-standing Kurdish insurgency in Turkey’s south-east bordering northern Iraq, said the “separatist” referendum was unacceptable and economic, trade and security counter-measures would be taken.

He stopped short of saying Turkey had decided to close off the oil flow. Hundreds of thousands of barrels of oil a day come through the pipeline in Turkey from northern Iraq, but he made clear the option was on the table.

“After this, let’s see through which channels the northern Iraqi regional government will send its oil, or where it will sell it,” he said in a speech. “We have the tap. The moment we close the tap, then it’s done.”

Yildirim said Ankara would decide on punitive measures against the KRG after talks with Iraq’s central government.

“Our energy, interior and customs ministries are working on (measures). We are evaluating steps regarding border gates and air space. We will take these steps quickly,” Yildirim told Turkish broadcasters.

Local media said Turkey had blocked access to the KRG via the Habur border crossing with Iraq. Ankara’s customs minister denied this, saying Habur remained open but with tight controls on traffic, according to the state-run Anadolu agency.

“It seems all quiet. We don’t have any difficulties passing the border from both sides,” said Maruf Ari, a 50-year-old truck driver who crossed back into Turkey from Iraq on Monday morning.

The United States and other Western powers also urged authorities in the KRG to cancel the vote, saying it would distract from the fight against Islamic State.

Turkey has long been northern Iraq’s main link to the outside world, but sees the referendum as a grave matter for its own national security. Turkey has the region’s largest Kurdish population and has been fighting a three-decade insurgency in its mainly Kurdish southeast.

On Saturday Turkey’s parliament voted to extend by a year a mandate authorising the deployment of troops in Iraq and Syria.

The KRG exports hundreds of thousands of barrels of oil per day through Turkey to international markets, in defiance of Iraq’s central government.

With that in mind, Turkey is unlikely to make rash moves when it comes to sanctions against the KRG, said Nihat Ali Ozcan, a professor of political science and international relations at TOBB University of Economics and Technology.

“Closing the border gate, cancelling international flights and, at the final step, cutting the pipeline can be discussed,” he said. “Military pressure can be used directly or indirectly.”

The Turkish army launched military exercises involving tanks and armoured vehicles near the Habur border crossing a week ago and they are expected to continue until Sept 26. Additional units joined the exercises as they entered their second stage.

The military has also in recent days carried out daily air strikes against Kurdistan Workers Party (PKK) militant targets in northern Iraq, where the group’s commanders are based.

The PKK launched its separatist insurgency in 1984 and more than 40,000 people have been killed since. It is designated a terrorist group by Turkey, the United States and European Union.

In a travel warning, Turkey strongly recommended its citizens in the Iraqi Kurdish provinces of Dohuk, Erbil and Sulaimaniya leave as soon as possible if they are not obliged to stay.