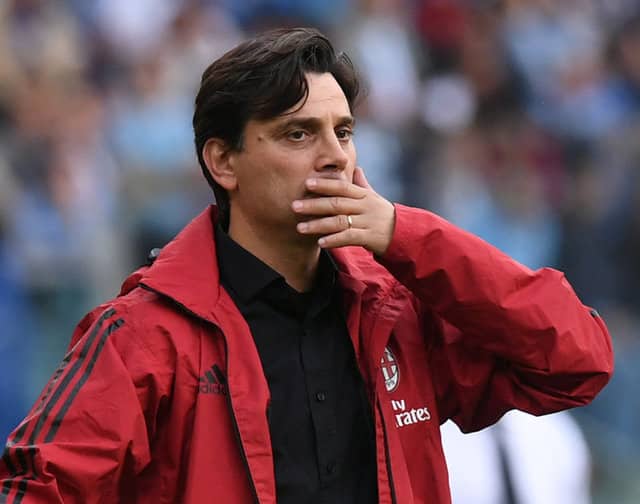 AC Milan coach Vincenzo Montella has plenty to think about

AC Milan were greeted with a festive atmosphere in their first home game of the season but less than two months later it seems like a distant memory as doubts multiply over their young, expensively-assembled team.

After spending more than 200 million euros in the summer, this was supposed to be the season when Milan would put several years of lacklustre performances behind them and regain their rightful place among the Serie A elite.

But Sunday’s dismal 2-0 defeat to Sampdoria — which followed a 4-1 thumping by Lazio in their previous league match away from San Siro – already has AC Milan fans wondering if they have witnessed another false dawn.

It was the manner of Milan’s defeat – barely mustering a decent shot on goal – as much as the result itself which left both coach Vincenzo Montella and chief executive Marco Fassone worried and angry.

“From my point of view, as an outsider, the thing that I disliked the most was the team spirit shown by AC Milan during the first 60 minutes,” said Fassone, the man behind the summer spending spree.

“This is not AC Milan’s spirit. There is a simple solution to this: we need to face each other and understand together that we are AC Milan, that we are wearing an important jersey.”

In April, Berlusconi agreed to sell the club to a Chinese-led consortium in a 740 million euro ($879.56 million) deal, signalling a dramatic change of direction after years of austerity in the transfer market.

Conti is a product of Atalanta’s impressive youth scheme while Swiss international Rodriguez is regarded as one of Europe’s most accomplished left backs.

The new-found optimism was apparent at AC Milan’s first home match of the season when a 65,000 crowd turned up at San Siro on a stifling August evening for a Europa League qualifier against modest Romanian side Univesitatea Craiova.

Milan won their first six competitive games of the campaign, but are now starting to look more like the inconsistent sides of the last few seasons and, with 12 points from six league games, are already six behind Serie A leading pair Juventus and Napoli.

“We cannot be satisfied with four wins and two losses every six games,” said Fassone.

“We have won nine games out of 11, but in Serie A we’ve only won four and away only one out of three. We have to be alert and step up because our rivals are doing better than us.”

“Young players tend to have ups and downs, and when you play every three days, it’s natural to lose intensity, to be less mentally tough,” he said.

“Our blackout is due to a lack of mental toughness when it comes to playing games of greater difficulty. Two defeats in the last three away games is a lot.”