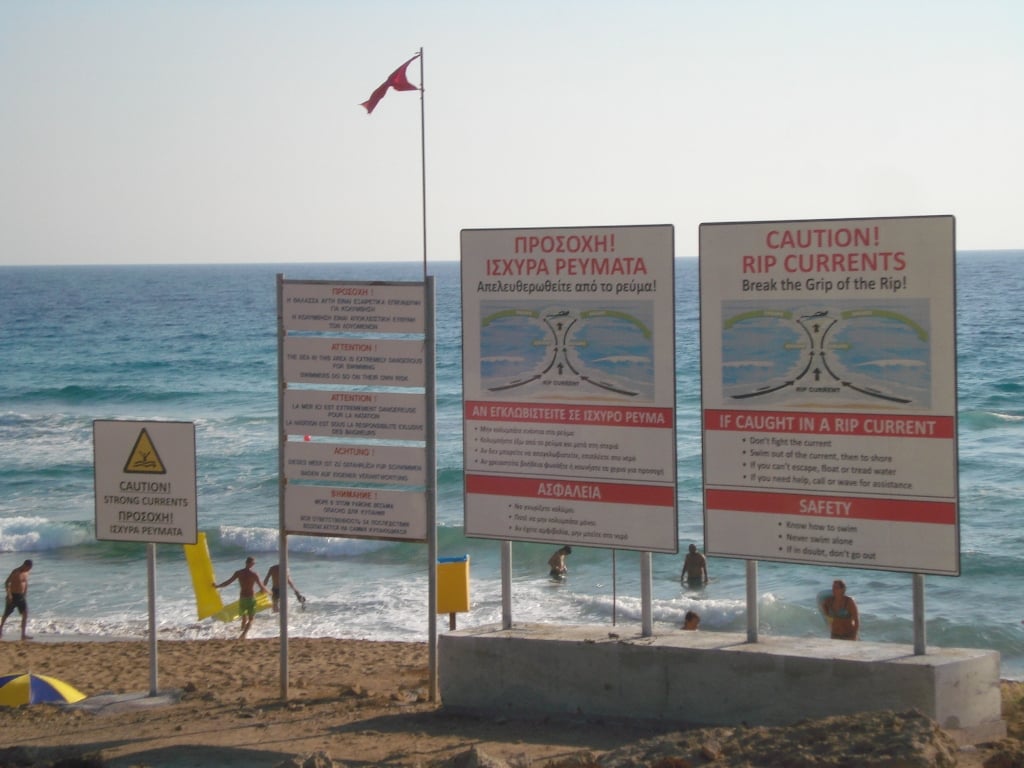 Signs clearly state how dangerous the beach is

FOLLOWING the death of two tourists in the dangerous waters of a deadly stretch of Paphos coastline in two days, officials have warned yet again that swimmers should heed the huge warning signs and avoid the area.

A swimming association has taken it one step further, calling on the authorities to close public access to the beach where at least 18 lives have been lost in about 10 years until long-delayed breakwaters have been built.

Paphos councillor, Nikos Simillides told the Cyprus Mail that it was tragic that holiday makers visiting Paphos have lost their lives but that those swimming there must bear the responsibility for their actions.

“This is not a swimming area. There are huge warning signs in different languages, red flags and although it is terrible to hear that someone has died, people decide to go in despite the warnings. I’m sorry to say, but it’s stupidity,” he said.

The first of the two to drown in the dangerous waters was on Saturday when a 54-year-old Russian man went swimming in the area despite strong winds and a rough sea. The second man was a 54-year-old Polish man on Sunday afternoon.

The beach at Tafoi ton Vasileon (Tombs of the Kings), its official name, is part of the deadly stretch of coastline and found just off the Tombs of the Kings’ road in Paphos, which is home to many of the town’s hotels and hotel apartments.

Officials are in a dilemma about what to do in this area, as it is found in front of a popular Paphos hotel. The dangerous currents mean it is not designated as a swimming area by the relevant authorities and therefore there is no lifeguard in place. But if a lifeguard is stationed there, it gives the impression that it is OK for people to enter the sea, said the councillor.

However, a spokesman for the Paphos lifeguards’ association said that the government needs to take urgent and immediate steps to place a person of authority at the deadly spot, even if it is just to advise people not to enter the sea.

“The rip current here is particularly dangerous and someone needs to be there to give extra warnings to people. After a drowning this could be a fireman or a policeman. Should we wait for ten drownings one after another to take some action. Most people using this area are on holiday and obviously the signs are not good enough,” he said.

He added that the authorities have to take care of the beaches and spend some money doing so. He also questioned why the construction of wave breakers along this stretch of coast were taking so long to complete and why work was abandoned during the summer months.

“If it’s because of the noise being a disturbance during the summer that’s nonsense, a bit of noise is better than someone losing their life,” he said.

The three breakwaters, costing two million euros, were expected to be completed before the current summer season. Work is due to commence again in October and should be completed next May, said Simillides.

The councillor stressed that the municipality does not actually bear responsibility for the stretch of coastline as it is not an officially designated bathing area, but added that once the wave breakers are completed, the municipality would make an application to the relevant body in Nicosia to declare it as such. This way, the law would permit a lifeguard to be stationed there, he said.

However, he stressed that putting a lifeguard on such a dangerous area that has had multiple deaths in the past didn’t mean that people could stop being vigilant of their own safety.

“This is a dangerous area and people will always have to be careful and look after themselves here,” he warned.

In addition to the slew of deaths over the last 10 years, hundreds of life saving rescues have been carried out by lifeguards from nearby hotels during that time.

Following the recent deaths, the Paphos winter swimmers’ association on Monday demanded the ‘closure’ of the beach with immediate effect, until the construction of the wave breakers is completed

President Matthew Ierokepiotes said that it was inconceivable that there were no lifeguards on the most dangerous beach of Paphos on the pretext that the beach is not a swimming beach.

“Foreign holidaymakers, who are not fully aware of the serious dangers, remain essentially unprotected and find themselves caught up in huge waves and strong currents,” he said.