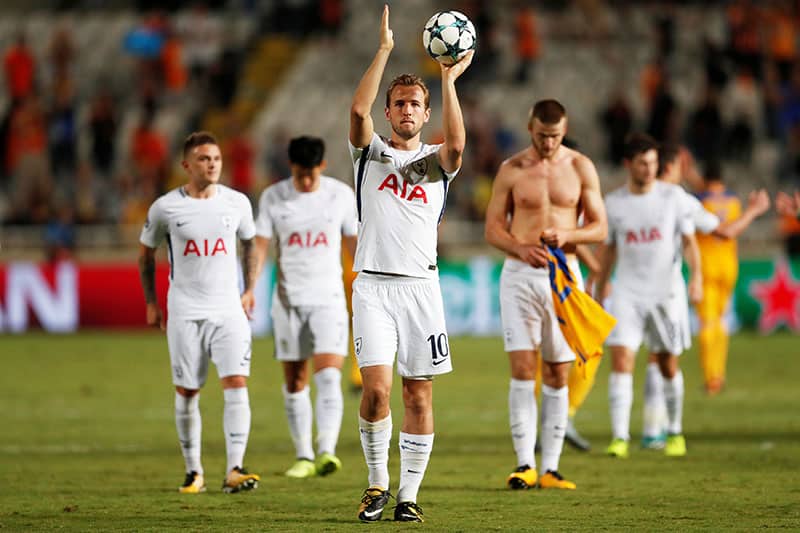 Tottenham's Harry Kane celebrates with the matchball after the match

A Harry Kane hat-trick relegated Apoel to defeat on Matchday Two of the Champions League at Nicosia’s GSP Stadium on Tuesday night.

Apoel had a number of good chances in both halves but were ultimately put to the sword by the lethal English striker, who led Tottenham Hotspur to a 3-0 win.

Spurs monopolised possession in the first 15 minutes, with Apoel struggling to get out of their own half. But after a period of dominance, Apoel emerged from their shell. In their first venture forward, Praxitelis Vouros found Roland Sallai in the box, who headed just wide.

Spurs responded with a good chance of their own in similar circumstances. Kieran Trippier crossed in from the left and Heung-Min Son, who appeared offside, nodded over from close range.

Apoel countered that with a golden chance, with De Camargo rattling the woodwork with a left-footed strike. Minutes later, again Apoel could have gone ahead as Carlao connected with a header from a corner but his effort went wide.

Spurs almost helped Apoel to the lead soon after as Lloris, in his attempt to clear the ball out of danger, smashed the ball against the back of teammate Davinson Sanchez, with the ball fortunately going just wide for a corner.

However, against a top side, failing to take chances usually comes at a price and one player who needs no second invitation is Harry Kane. Toby Alderweireld threaded a ball through to the striker, who turned sharply before coolly slotting beyond Boy Waterman for 1-0.

Apoel were not downhearted however, and emerged positively after the restart. De Camargo wonderfully knocked down a long ball for Sallai who caught the ball sweetly on the bounce but Lloris saved.

Stathis Aloneftis then called Lloris into action after being played in behind the Spurs backline, which required a fine tip over the bar from the Frenchman.

Yet, in a similar story to the first half, once those chances were not taken, one man smelt blood. In a swift counter-attack, Moussa Sissoko picked out Kane at the edge of the box and there was only one place the ball was going. 2-0 for the visitors.

Five minutes later, the same outcome. This time Trippier with the cross, and Kane nodded the ball into the same corner for his hat-trick.

It was a spirited display as ever from Apoel, but the stark contrast in finishing ability was ultimately the difference between the two sides.
The night’s other scores:

House committee says air conditioners should be put in schools