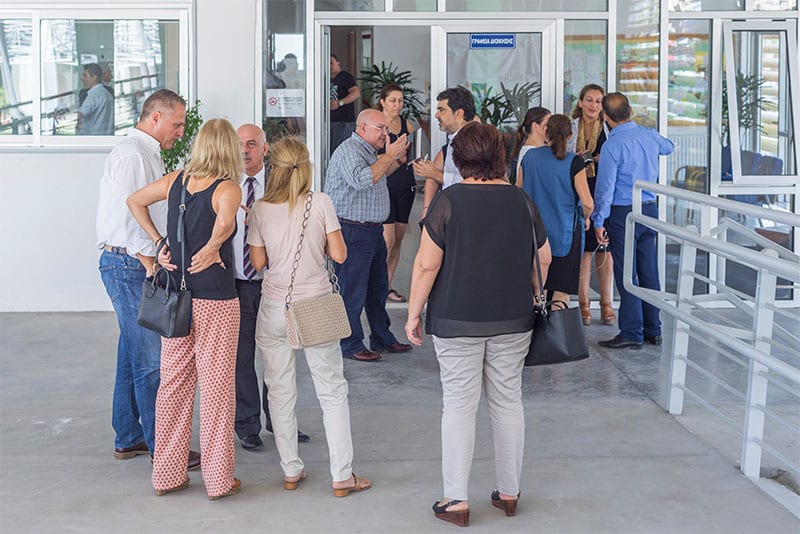 Members of the House education committee at a Limassol school

Air-conditioners must be installed in schools but only after diligent study, since the decision touches on several aspects, House Education committee chairman Kyriacos Hadjiyannis said on Tuesday.

Speaking after a visit to Limassol schools by a delegation of committee members, Hadjiyiannis was asked to comment on the issue that came up on Monday after 100 pupils of the Lanitio high school were handed a suspension after sitting out their classes last week in protest over the absence of air-conditioners in classrooms.

“We asked the [Education] ministry to look into this matter, and we feel that, yes, air-conditioners must be installed in schools, given climate change, too, but the matter must be reviewed in its entirety,” Hadjiyiannis said.

According to the committee chairman, there are several aspects that need to be studied before a decision is made, in addition to the cost, which include health and environmental issues.

Hadjiyiannis said arrangements must be made to protect the health of pupils walking in and out of air-conditioned classrooms, adding that air-conditioners are not an optimal option if the classrooms are not adequately insulated to effectively preserve cool temperatures.

The issue of air-conditioned classrooms, as well as others, was discussed at Tuesday’s meetings between the committee and the Limassol schools the delegation visited.

“We find that many things have been done, the new secondary-school regulations have started to kick in, and a very good result it being seen,” Hadjiyiannis said.

“Issues of timely staffing were an entirely pleasant surprise this year, despite minor issues relating to the fact that teachers’ rights to object to their postings extend into the academic year. We must all together, parliament, the Education commission and the Education ministry, look at how we can achieve the vision of completing staffing with the end of the school year.”

Other issues discussed related to infrastructure and “outstanding construction work by contractors”.

Apoel blown away by Harry Kane