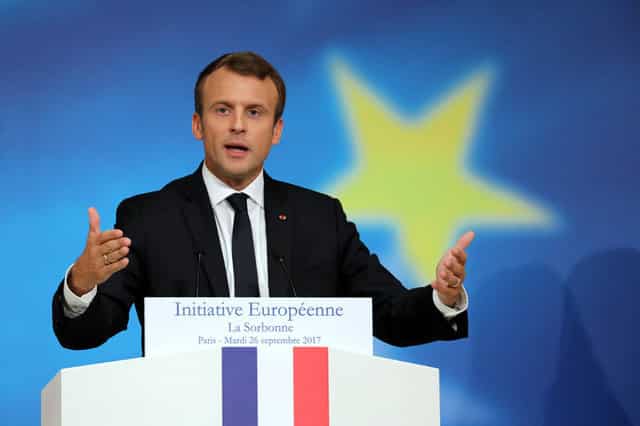 French President Emmanuel Macron delivers a speech to set out plans for reforming the European Union at the Sorbonne in Paris, France, September 26, 2017. REUTERS/Ludovic Marin/Pool

French President Emmanuel Macron offered a sweeping vision for a renewal of Europe on Tuesday, calling for the EU to cooperate more closely on defence, immigration, tax and social policy, and for the single currency bloc to have its own budget.

In a speech delivered two days after the German election in which Chancellor Angela Merkel’s alliance did less well than expected, limiting her freedom to manoeuvre on Europe, the 39-year-old president held little back in terms of ambition.

Speaking at the Sorbonne, he portrayed Europe as needing to relaunch itself, saying that on issues as diverse as asylum, border protection, corporate tax, intelligence sharing, defence and financial stability it needed to forge deeper cooperation.

“The only path that assures our future is the rebuilding of a Europe that is sovereign, united and democratic,” the former investment banker and philosophy student said in his opening remarks, flanked by a French and a European Union flag.

“At the beginning of the next decade, Europe must have a joint intervention force, a common defence budget and a joint doctrine for action.”

In his campaign for the presidency, Macron made European reform a central plank and he and Merkel have in recent months spoken often about their desire for France and Germany, the EU’s two largest economies, to take the lead on integration.

But less than five months into his five-year term, Macron faces the threat that Merkel, 63 and looking to start her fourth term, has less capacity to move than either would have hoped.

Her CDU/CSU alliance is still the largest bloc in the Bundestag, but to build a working majority she will likely have to form a coalition with the liberal Free Democrats (FDP), who are opposed to many of Macron’s ideas, and the Greens.

The fiscally conservative FDP dislikes the idea of a eurozone budget or any facility that may lead to financial transfers from wealthier eurozone countries to poorer ones, as well as the possibility of national debt being pooled.

The FDP has also called for phasing out Europe’s ESM bailout fund – which Macron wants to turn into a European Monetary Fund, with preemptive powers to help out struggling countries – and wants to see changes to EU treaties that would allow countries to leave the eurozone.

In Berlin on Monday, in a reference to Macron’s speech, Merkel said it was important to move beyond catchphrases and provide detail on how Europe could be improved.

“It is not about the slogans but what lies behind them,” she said. “I am talking about this with the French president.”

Rather than tailoring his speech to fit the contours of what the FDP, the Greens or Merkel may want to have heard, Macron kept his vision broad and far-reaching, while also detailing some specific ideas for an improved eurozone.

He said a separate budget for the 19 countries that use the euro – out of 28 EU member states – was necessary to finance joint investments and to insulate against economic shocks.

In the past he has said such a budget should amount to “several points of GDP”, but he did not put a figure on it on Tuesday. Ahead of his speech, Elysee officials said Macron hoped his ideas would be taken into account in Germany’s coalition building negotiations.

Those talks are not expected to begin until mid-October and may take several months. Macron’s thinking appears to be to get his ideas out and into the discussion before the coalition agreement takes shape. German coalition deals are strict, setting red lines for how far the chancellor can manoeuvre.