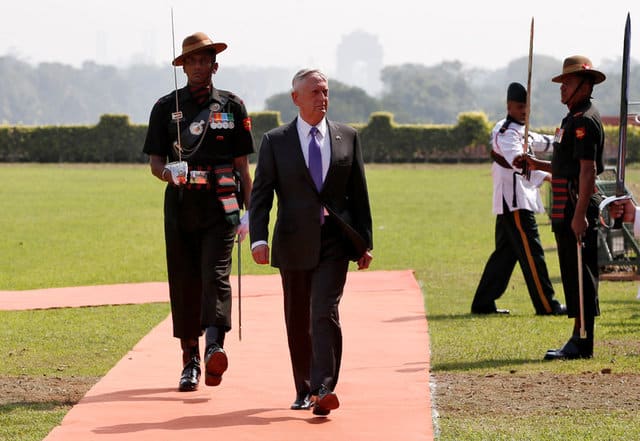 US Defence Secretary Jim Mattis held talks with Indian leaders on Tuesday to deepen military ties including the potential sales of US jet fighters and surveillance drones that experts say are aimed at helping it rein in China’s influence in the region.

Mattis is the first cabinet rank official to visit India under the Trump administration and was due to meet Prime Minister Narendra Modi.

Ties between India and the United States have rapidly expanded with New Delhi buying weapons worth $15 billion over the last decade from the United States, moving away from traditional supplier Russia.

At the top of the agenda is to move forward with a deal to supply 22 Sea Guardian drone aircraft to the Indian navy that the US government approved in June, the first such clearance to a non-Nato ally.

The Indian navy has sought the unarmed drones to help it mount longer duration surveillance of the Indian Ocean where Chinese naval ships and submarines are making regular forays.

The United States has been critical of China’s build-up of military facilities in the South China Sea and had suggested joint patrols with the Indian navy across the region. New Delhi has turned it down, fearing a Chinese backlash.

“The strategic underpinning of India-US defence ties is in the common concerns they have over China, over its revisionism.”

The Indian air force has also asked for 90 armed Avenger Predator drones that experts say it could deploy to conduct cross-border strikes, for instance on camps of militants that it says exist on the Pakistan side of disputed Kashmir.

Such a sale would need White House and Congress approval, sources said. Pakistan and possibly China are likely to see such a sale as de-stabilising.

Vivek Lall, chief executive, US and International Strategic Development at General Atomics, the company that makes the drones, said it was pleased the Indian government had won approval for the surveillance version of the drone.

“Not only will this platform enhance India’s capabilities in the areas of maritime domain awareness and security – but the interoperability with one of the US’s most important strategic partners will contribute to security across the region,” he said.

The two sides are also expected to discuss Lockheed Martin’s offer to build F-16 fighter planes in India as part of Modi’s drive to build a domestic military industrial base.

Sweden’s Saab is the other contender for the deal to supply at least 100 single engine combat planes to the Indian air force that the Modi administration wants to be built locally.

Ahead of Mattis’s trip, the Pentagon stressed India’s broader role in the region.

“The secretary will emphasise that the United States views India as a valued and influential partner, with broad mutual interests extending well beyond South Asia,” it said.