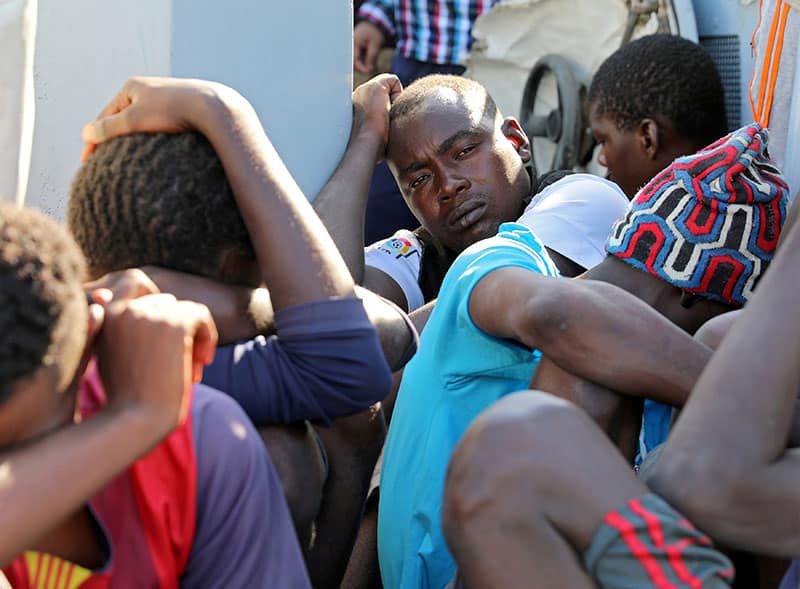 A Libyan coast guard vessel fired shots and boarded a humanitarian ship in the Mediterranean on Tuesday, demanding that the migrants on board be handed over to them, a spokesman for the Mission Lifeline charity said.

“The Libyan man said: ‘This is our territory,'” said Axel Steier, a spokesman for the German-based charity that performed its first rescues on Tuesday.

“After a while, they fired shots,” he said, probably into the air or sea. No one was wounded.

Afterward two Libyans boarded the Lifeline ship to try to persuade them to hand over some 70 migrants they had just taken off a wooden boat in international waters.

“We told them we don’t return migrants to Libya. After a while, they gave up,” Steier said. The two men spent about 15 minutes on board, he said.

A Libyan coast guard spokesman in Tripoli declined to comment, saying he was seeking information. Italy’s coast guard, which coordinates rescues, did not respond to repeated telephone calls.

It was the latest incident reported between the Libyan coast guard and humanitarian rescue ships operating off North Africa. Financed, trained and equipped by Italy, the Tripoli-based coastguard is intercepting a growing number of migrant boats.

Last month, the Libyan coast guard ordered a Spanish rescue vessel to sail to Tripoli or risk being fired upon, though it later let it go. The worsening security situation has prompted several groups to halt rescue operations, and those who remain tend to patrol further from shore.

This year the Libyan coast guard had stopped 16,567 people before they were rescued and taken to Italy, according to the International Organization for Migration.

But overall departures are down more than 20 percent and they dropped more than 80 percent in August after an armed group in Sabratha clamped down on smuggling.

Italy is counting on the Libyan coast guard together with the Tripoli and municipal governments to put a halt to migrant arrivals from a country that has been torn by civil war and factional fighting since the ouster of Muammar Gaddafi in 2011.

The policy has been harshly criticised by humanitarian groups because of the dire conditions of Libya’s detention centres and the inhumane treatment of migrants in general in Libya.

Despite recent declines in departures, almost 1,000 migrants were rescued on Tuesday. Save the Children’s Vos Hestia ship picked up some 750 people in six different rescues, a spokeswoman said, and the Lifeline had more than 200 on board.

“There is no longer any work in Libya and you risk being attacked,” a 26-year-old Libyan rescued told members of the SOS crew. “It is impossible to live in Libya, it has become too dangerous.”

Larnaca residents to be charged for cemetery