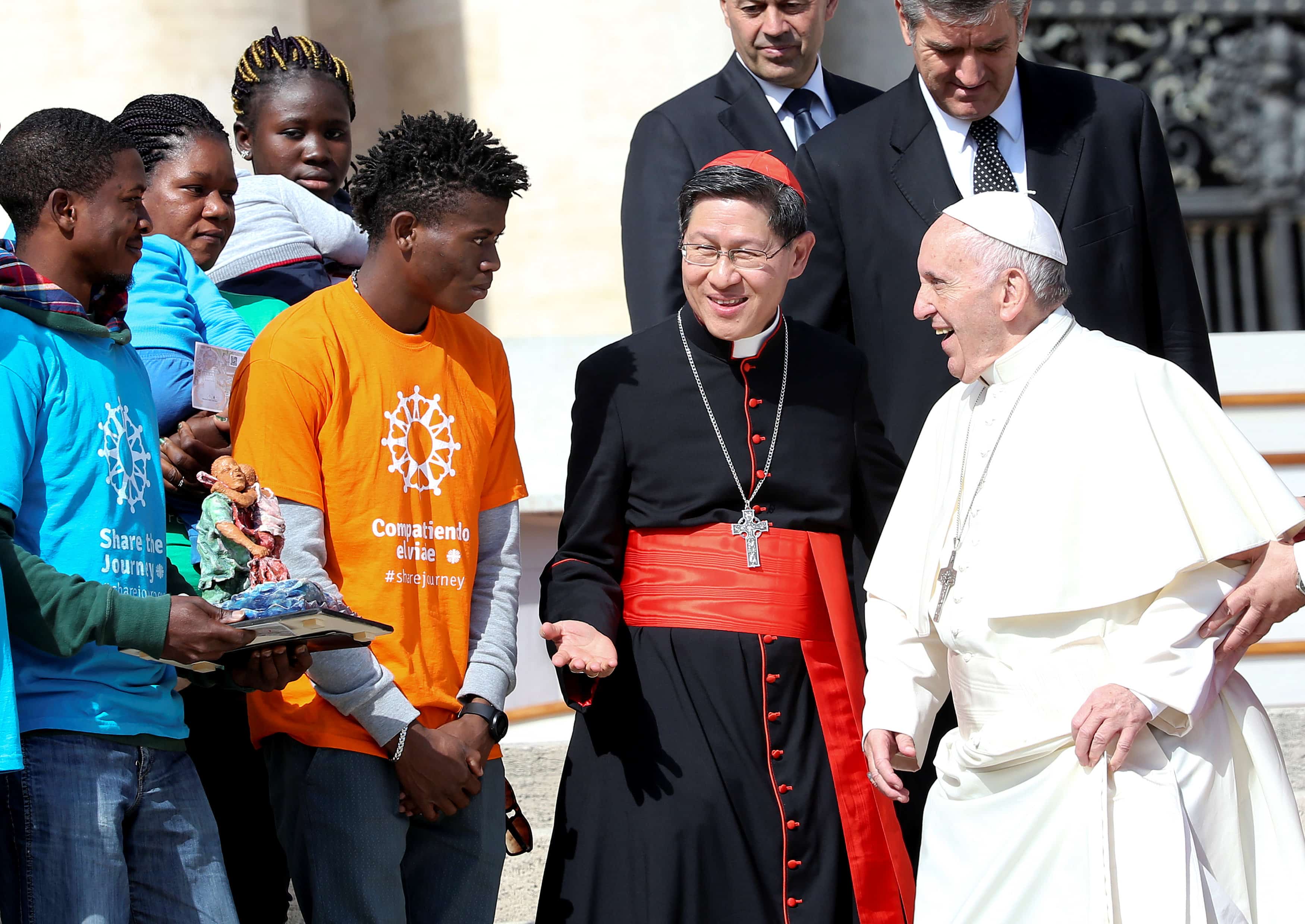 Pope Francis meets Cardinal Luis Antonio Tagle and a group of migrants during the Wednesday general audience in Saint Peter's Square at the Vatican.

Pope Francis has launched a two-year activism and awareness-raising campaign about the plight of migrants to counteract mounting anti-immigrant sentiment in the US, Europe and beyond.

The campaign encourages people to actually meet with migrants and listen to their stories, rather than treat them as statistics clouded by negative stereotypes.

Francis, the son of Italian immigrants to Argentina, launched the campaign during Wednesday’s weekly general audience, throwing his arms open to welcome the many refugees and asylum-seekers who filled St Peter’s Square.

He urged individuals and governments to welcome migrants with similarly open arms and share in their plight, as Jesus did.

He said migrants are driven by the very Christian virtue of hope, to find a better life, and said receiving countries should share in that hope by welcoming them and integrating them.

The church is undertaking the campaign amid a hardening of anti-immigrant sentiment in the West.

In German elections this week, anti-migrant party Alternative for Germany secured seats in that country’s parliament for the first time.

In the US, President Donald Trump is pressing for sweeping limits on immigration, including restricting travel from Muslim and other countries and slashing refugee admissions.

At the same time, he has acknowledged governments must manage refugee flows “with prudence”, taking into account how many people it can successfully integrate into society.

“Christ urges us to welcome our brothers and sisters with our arms truly open, ready for a sincere embrace, a loving and enveloping embrace,” he said.

Pointing to the colonnade that envelopes St Peter’s Square, he said the embrace of migrants should mimic the colonnade, “which represents mother church who embraces everyone by sharing in our common journey”.

The US Conference of Catholic Bishops, which has a leading role in the migrant campaign along with the Vatican’s Caritas charity federation, has repeatedly condemned restrictions on immigration and opposed some of the Trump administration’s initiatives.

Cardinal Daniel DiNardo and Archbishop Jose Gomez, who lead the bishops’ conference, have met with US vice president Mike Pence to discuss “our reasons why we’re so concerned and opposition to some of the ways the administration was deciding” immigration policy, Cardinal DiNardo said in a phone interview.

The campaign aims to challenge animosity toward immigrants through websites featuring “myths and truths”, personal stories of individual refugees and explanations of church teaching on migration.

Organisers are asking Catholics to take public action in support of migrants, posting pro-immigrant messages on social media and participating in programmes where they can meet migrants.

“He’s very interested in that we change hearts before we deal with policy,” Cardinal DiNardo said of the pope.