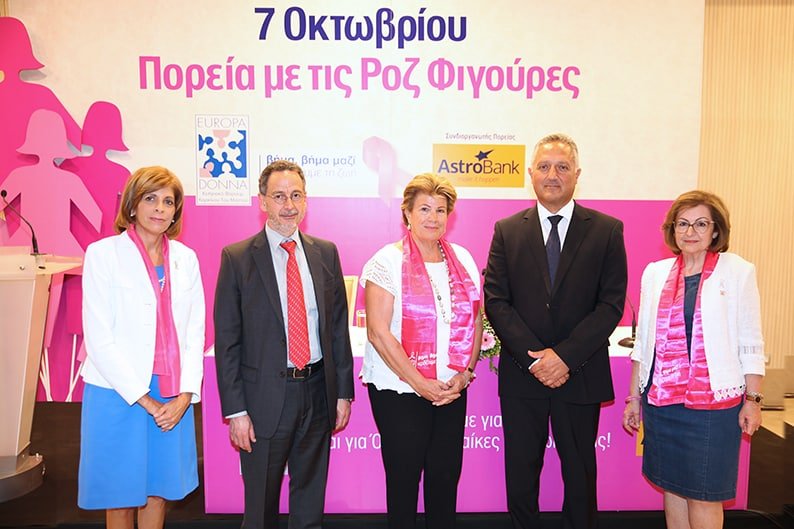 The announcement of the annual Europa Donna walk

“Breast cancer is still the first cancer for women and the first cause of death. One in eight women will get sick,” Europa Donna Cyprus president Evi Papadopoulou told a press conference at the presidential palace.

“However, prevention campaigns, early diagnosis, new targeted drugs, treatments and a specialised approach bring the survival rate in Cyprus up to 80 per cent as in other advanced countries. Today in Cyprus there are at least 8,000 women who continue their lives after cancer and another 350 women who receive treatment each month.”

Survival is not only fought in research laboratories, but also by doctors, in surgeries, schools, by national health systems and in government offices, she added.

For this reason, Europa Donna Cyprus’ focus is on two main pillars, specialisation and an interdisciplinary approach with the common purpose to stop the disease from taking lives.

At this year’s walk, held as part of global breast cancer awareness month, participants will hold 620 pink figures, one for each woman newly diagnosed with breast cancer, seven blue ones symbolising the seven men diagnosed and 102 white figures for the persons who died from the disease over the past year.

The walk will start at the carpark on Makarios avenue and end at the Astrobank headquarters at the junction of Griva Digeni and Themistokli Dervi street.

After the walk, the figures, each containing a message of strength and support, will be placed in front of the bank.

Papadopoulou thanked AstroBank chief Giorgos Appios and the bank for their long-term support and cooperation.

Appios said the ultimate goal is for the walk “to be transformed sometime in the future into a celebration and walking empty-handed, without any new diagnosed incidents and without any loss of human life from the illness.”

Europa Donna Cyprus and AstroBank called on the public to participate in the pink silhouette walk under the motto ‘We walk for all the women in our lives’.